For further background on the year in film please refer to the Some Other Movies From 1977 entry.

That said, I always feel like 1977 was the beginning of the modern movie.  You had Star Wars, you had Close Encounters of the Third Kind, you had Smokey and the Bandit.  Sure, a lot of the special effects used in these movies aren't all that special by modern standards, but directors were learning how to trim the fat off their movies; how to make them less talky.  Not every movie from 1977 exemplifies this trend - especially not most of the movies below, which were chosen for their relative obscurity - but we were getting there, slowly but surely.

Some things that happened in 1977:

Linked entries below can be viewed in their entirety on YouTube. 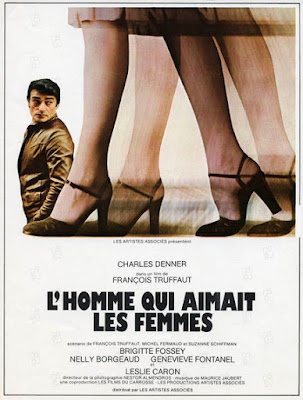 1. The Man Who Loved Women

No, not the Burt Reynolds version.  That came six years later.  This is the original French version.

With as many French movies as I've seen, I'm still not that familiar with Francois Truffaut.  I've seen Day for Night, perhaps his most celebrated film, but that's it.

The Man Who Loved Women details the exploits of a womanizer, and while I'm not proud to say it, I did relate to this character a lot.  Truffaut paints a vivid picture of the womanizer's dilemma, and I found myself liking this film a lot more than Day for Night.

This movie, however, just wouldn't work in 2020.  Nowadays that would be called stalking, and that would be bad.  Perhaps yesterday's romanticism is grounds for today's restraining order?

If you want my unprofessional opinion, this animated version of Tolkein's first book is much better than Peter Jackson's later, bloated attempt.  It tells the same story, but in a way that kids can relate to.  Oh, and the music's great too.

Like Wizards (below), a nice pipe might add to your enjoyment of this movie.  But unlike Wizards, I had no trouble either concentrating upon or enjoying this one.

Fun Fact 1: This was an American-Japanese production.  The Japanese end of things was handled by Topcraft, a studio that eventually morphed into Studio Ghibli, best known for Sprited Away.

Fun Fact 2: In 1978 Ralph Baksi (see Wizards below) released his Lord of the Rings.  After the release of that movie Rankin/Bass released an adaptation of The Return of the King on television.  The Return of the King, even less reliant on American artist Lester Abrams' original designs, looks even more like a Studio Ghibli production.

Familiar with Thackeray's Vanity Fair?  If so, you'll appreciate this movie's worldly cynicism.  It's not sparing in its honesty, and there are neither heroes nor villains populating the story it tells.

In Joseph Andrews Peter Firth.stars as a footman to a wealthy woman.  It was the.film Tony Richardson directed after his firing from Mahogany (see Some Other Movies From 1975 (2)) and it's much, much better than that earlier effort.  It's also genuinely funny, and moreover funny in a way that would have made John Waters proud.

BBC documentary on Clint Eastwood.  It asks a lot of the questions people were asking about Eastwood at the time.  Is he a good actor?  Is he a good director?  Do his films promote violence?  Do his films have an agenda?  By way of context, in 77 The Gauntlet would hit theaters (a very overlooked movie), and The Outlaw Josey Wales was released the year before. 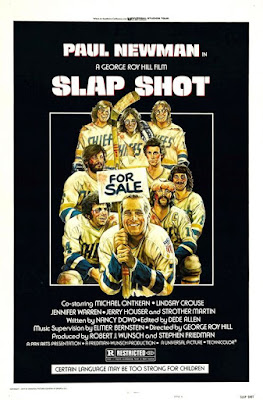 The script had some issues, but this story of a hockey team's final season is one of the better sports movies.  Paul Newman is engaging as the team's star player/coach, and the rest of the cast is good too.  It's easy to understand why this movie has such a following - and not only because of Canadians.

Fun Fact 1: Towards the end of this movie you can see Deep Throat on the theater's marquee.

Fun Fact 2: George Roy Hill, the director of this movie, also directed Newman in Butch Cassidy and the Sundance Kid and The Sting.

Black and white Russian movie about soldiers taken captive by the Nazis during World War II.  It's as depressing as you'd expect.

I recommend watching this on a sunny day.  That way, when it's over, you can go outside, get some sunshine, and think happier thoughts.

As far as Russian movies about WWII go, I didn't find this one as devastating as 1985's Come and See.  The production values in this movie were also a lot lower.  It's a good movie if you're looking for that introspective, Crime and Punishment vibe, and the ending will definitely stay with you, but it requires a certain frame of mind to "enjoy"... if enjoy is the right word.

A good wizard contends with an evil wizard in a post-apocalyptic future.

And hey, it's Ralph Bakshi, remember him?  By 1977 he'd established himself as an adult-oriented alternative to Disney, and he enjoyed quite a cult following.

I think you'd want to smoke some of your best before approaching this one.  I went into it stone cold sober, and while I could kind of follow what was going on, I had a lot of trouble concentrating on it.  A good buzz would have evened things out nicely.

4. That Obscure Object of Desire

A rich man becomes obsessed with a much younger woman.  This was director Luis Bunuel's last movie, ending a career in French cinema which lasted decades.  The only thing stopping me from placing this movie in the "Excellent" category is Bunuel's decision to cast two actresses in the same role.  It seems like an unnecessary flourish on the director's part.

Fun Fact 1: before Carole Bouquet and Angela Molina were both cast as the younger woman, Maria Schneider was set to play the part.  Her argument with the director prior to filming led him to the idea of casting two women in her place.

Fun Fact 2: Carole Bouquet would go on to star opposite Roger Moore in the Bond film For Your Eyes Only.

Fun Fact 3: Fernando Rey, who stars in this, appeared as the French drug dealer in The French Connection years before.

South Korean film about a young woman searching for happiness in a society dominated by men.  I liked it, but I'm not exactly sure what that "rape" scene was about.

6. The Making of Star Wars

"A full-fledged social phenomenon."  Yeah, in 1977 Star Wars was the biggest thing ever.  With all the sequels, prequels, technological advances and corporate takeovers that followed it's probably hard for younger viewers to realize how truly special this movie was, but this documentary does go some distance toward highlighting the scope of its achievement.

The interview with Carrie Fisher in the arcade was the best part of this film for me.  So young, so beautiful.  I haven't seen the most recent Star Wars movie, but the idea of a cgi version of her really bothers me.

Bill Moyer takes a camera crew into a New York mental institution.  Some things have changed since the 70s, other things sure haven't. 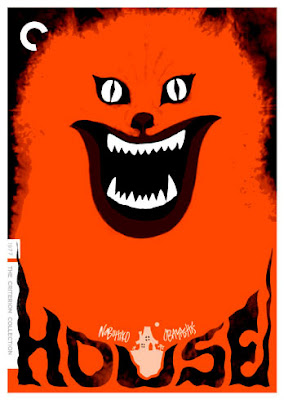 Several young girls visit a spooky mansion in the countryside.  In some ways it feels like a Japanese response to the Italian giallo pictures, in other ways it's just weird in the way that the weirdest Japanese movies are weird. 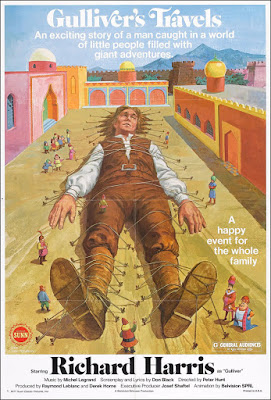 Maybe not bad, exactly, but there's nothing here for adults, and modern-day kids will find it boring.  Richard Harris stars in this talky mixture of live action and animation, and the results are decidedly underwhelming.

Fun Fact: The director of this movie, Peter Hunt, started his directorial career with the Bond film On Her Majesty's Secret Service.

TV movie (later released theatrically) starring Nicholas Hammond as the famous web-slinger. I'd already seen this of course, but it had been decades. The soundtrack is memorably funky, but between bits of superheroism it moves at a glacial pace.

Fun Fact 1: Stan Lee, who assisted in the production, regarded this show/movie as "juvenile."

Fun Fact 2: CBS canceled the show after only 13 episodes. Part of their reason for doing so was a desire not to appear as "the superhero network." Around the same time The Incredible Hulk, Wonder Woman, Captain America, Doctor Strange, Shazam and Isis all received the live action treatment on CBS.

Fun Fact 3: They tried to revive this show in the 80s. The revival would have teamed Hammond's Spider-Man (in his black costume!) with Bill Bixby and Lou Ferrigno's Incredible Hulk. 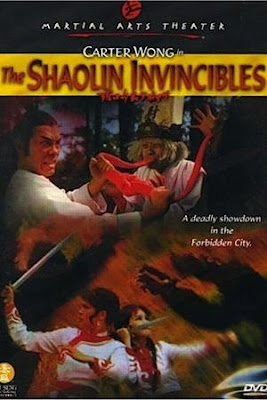 In the descriptions of a lot of these Hong Kong movies I'm tempted to write "kung fu."  I mean really, who cares what the plot really was?  For what it's worth, two sisters orphaned during the Ching Dynasty seek revenge against the official that killed their family.  Is it a historical drama that continues to enrich our understanding of the time period and our awareness of human nature?  Nope.  Is there kung fu?  Yep.

The More You Know: At a certain point in this movie the bad guys square off against a pair of gorillas.  AND THE GORILLAS KNOW KUNG FU.  The boss gains control over the gorillas by kicking them in the top of their heads.  If you're ever threatened by a pair of kung fu gorillas, now you know what to do! 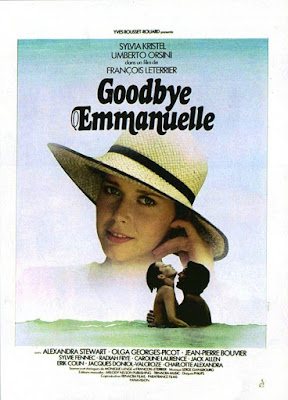 Emmanuelle and her sexually liberated friends bang each other in the Seychelles.  The star of this one is Sylvia Kristel, not Laura Gemser (the "black" Emmanuelle).  I find Laura Gemser much hotter, but Kristel is definitely a better actress.  This movie'ss also far more polished than anything in the "Black Emmanuelle" series.  It's still far from great, but the Seychelles sure are pretty.

Comparing the two versions of Emmanuelle, the original Emmanuelle and "Black Emmanuelle," I'd have to say the more solitary version played by Gemser makes a lot more sense to me.  Setting Emmanuelle among a group of like-minded libertines does make it easier to write a story around her, but their shared sexual obsessions makes them harder to relate to.

There's also something off-putting about Kristel's circle of friends.  While watching them recruit third and fourth-string sex partners I kept imagining myself in those situations.  People like that, in real life, would probably seem kind of gross.