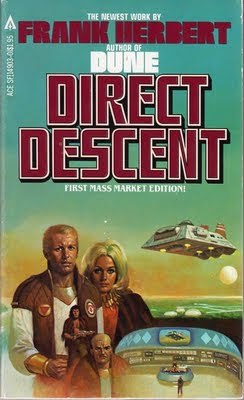 Frank Herbert is famous for writing the Dune novels, which his son (and another guy) later wrote sequels to. I thought one of these novels ("Chapterhouse Dune") was awful, two were just OK ("Children of Dune" and "Dune"), and the other three ("Dune Messiah", "God Emperor of Dune", and "Heretics of Dune") were truly epic. As for the books his son (and the other guy) wrote, I think they are best left in the discount bin where they belong.

"Direct Descent" is one of the many, many novels Frank Herbert wrote before he was famous. It is an extension of a short story first published in 1954. Like many of Herbert's "pre-Dune" novels, it showcases ideas in their embryonic form. It is a lot like reading the author's notebook, and offers a fascinating glimpse of ideas that he would later bring to a wider audience.

The setting is Terra, thousands of years in the future. At this point in time, the entire Earth has been converted into a vast library, wherein the knowledge amassed from a galactic empire is stored. A new president has been elected, and believing all knowledge to be evil, sets out to destroy the library in the hopes of eradicating knowledge itself. The book is something of a dialogue between rationalism and mysticism, and given that the book belongs to the SCIENCE-fiction genre, the outcome is fairly obvious from the beginning. The book also resembles Asimov's Empire novels in many ways, though I can't say if this was intentional or just coincidence.

Regardless of whoever owned these ideas first, Herbert presents them in his own inimitable style. And even if Asimov created some of these concepts, Herbert could always take them to a higher level. This book is an easy read, and I liked it a lot. Of course it's not on the same level as something like "God Emperor of Dune," but it's a lot less ponderous than the more labored of his Dune novels.
張貼者： Times Three 於 上午4:23