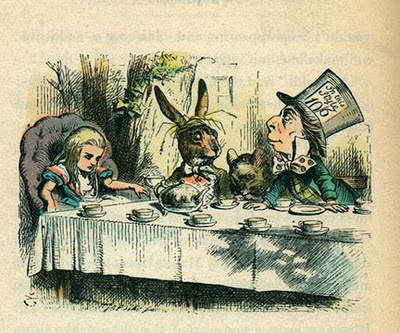 A while ago I also read Frank L. Baum's "Wizard of Oz." The "Wizard of Oz" isn't nearly as old as "Alice in Wonderland," having been written almost a century later, but both books are among the most famous works of children's literature out there.

"Alice in Wonderland," written in the mid-1800s, is a clever book, and far outshines the "Wizard of Oz". It is also an easy read, and can be disposed of in an afternoon - if the mood strikes you. I would recommend it to anyone tired of more serious books.

Carroll wrote "Alice in Wonderland" for the sole purpose of entertaining kids, and in this respect the book succeeds brilliantly. It is also much better than the astonishingly bad cinematic adaptation by Tim Burton, though it is on a par with the Disney cartoon.

The Disney cartoon was quite revolutionary for its time, not unlike Lewis Carroll's "Alice" was in his own day.
張貼者： Times Three 於 下午5:48