"The Cleft" by Doris Lessing 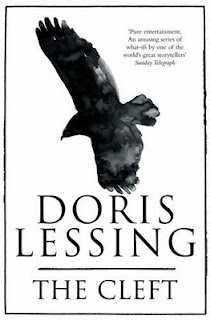 "The Cleft" first appeared in 2007, and its author, Doris Lessing, has received the Nobel Prize for her contributions to Literature.  It is a re-imagining of our human origins, told by a Roman Senator during the reign of Nero.

On an island of uncertain location, the first women are born and die outside the presence of Mankind.  Their births are all virgin births, and their lives are spent in idle amusement.  They resemble nothing so much as a race of sea lions, without a single bull to disturb the peace of the herd.

Then, one day, the first male is born.  Thus begins the race referred to by the Clefts as "The Monsters," so named because of their "monstrous deformities."  In the beginning the Clefts attempt to exterminate this new race, though with the protection of eagles the race of Mankind somehow survives.

Of course, some of the Clefts eventually find a use for those deformities, and what follows is a contest between those Clefts who see a use for men and those who don't.  This contest forms the core of the book.

"The Cleft" is a pretty good novel, though it does drag a bit.  I had been wanting to read it for a while, though it wasn't until recently that I actually tracked down a copy.  I would recommend it if you're looking for something truly weird, though more literal-minded people probably won't like it quite as much as I did.
張貼者： Times Three 於 下午4:13