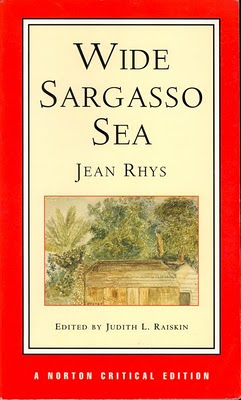 This is the second or third time I've read a novel in the Norton Critical Edition series. Books in this series are always slightly ridiculous, given that the commentary/background for the novel is always longer than the novel itself. In this instance, a novel of 100 or so pages is accompanied by 150 pages of masturbatory comments by miscellaneous scholars.

Even so, "Wide Sargasso Sea" is an excellent book. It is to some extent a reimagining of the Bertha character in Jane Eyre, set in the Caribbean before she was taken back to England. The novel explores the contrasts between master and slave, black and white, English and Creole, and also between the manners and customs of the colonizer among reluctant colonials.

Antoinette, born into the post-slaverholding society of Barbados, watches her mother descend into madness after their house is burned down by resentful locals. Antoinette is thereafter raised in a convent, and married off to a visiting Englishman. The two feel affection for one another at first, but by the end of the book her husband revolts against the unknowable aspects of his surroundings, and gives into suspicions regarding his new wife.

Jean Rhys, the author, was born in Barbados, and eventually settled in England up until her death. She made portraits with words, and "Wide Sargasso Sea" is without a doubt the best-known of such portraits. It is a painting of a landscape, and a people, that have largely vanished from our world. I highly recommend this book, though it is a bit on the depressing side.
張貼者： Times Three 於 上午8:31