If you go here, you can see a list of the "100 Greatest Movies of the 1970s."  There are of course other such lists.  I picked this one because it seemed more varied, and also contained more movies that I hadn't seen.  It also leans more towards the critically acclaimed movies, with less attention paid to the blockbusters.

I thought I'd compliment this list/quiz with a list of my own.  Here is what I came up with.

A. The Movies on this List that are Unquestionably Great, and Which Should be Seen by Everyone, Everywhere

Notes: Many of the above movies would qualify as "greatest of all time" - not just greatest of the 70s.  The Godfather Parts I and II, Apocalypse Now, and every other movie up until #24 is, in my opinion, classic.

Around #25 or so is where I'd start describing movies as just "greatest of the 70s."  They're excellent movies, but they belong more to the decade that produced them.  Shampoo and The Towering Inferno in particular, but even movies like Superman and Amarcord have a charm half traceable to their quality, half traceable to the sense of nostalgia they're apt to engender.

B. The Movies On This List That Are Watchable, but Definitely Not Great

Notes: I wanted to put Chinatown in the "Massively Overrated" category, but it's definitely more watchable than the other films there.  Not great, but good.  Ditto for Clockwork Orange and the Deer Hunter.  Yeah, they're "great" movies, but have you tried to sit through them lately?

Despite my undying love for Network, I couldn't bring myself to place it in the "Unquestionably Great" category.  It has definite flaws, though these flaws make it - in my eyes at least - more endearing.

Nashville is a movie that critics love, and while I liked it I can't say that it bowled me over.  It seems more like an interesting experiment than an actual movie.  Some great scenes there, but I can't say that they add up to a satisfying whole.

The Conformist is a wonderful looking film, but what about the story?  What about the characters?  Certainly worth a look on artistic grounds, but it lacks the dramatic weight that a truly classic movie ought to have.

C. The Movies on this List That Are Weird Enough to be Somewhat Interesting

Notes: None of these movies are especially entertaining, but if you're in the mood for something weird you might like them.

The stories of how these movies were made are also interesting in and of themselves.  The Man Who Fell to Earth?  Bowie was snorting his weight in cocaine - on a daily basis.  Last Tango in Paris?  A beautiful female lead, and decades of rape allegations.  Macbeth?  Made just after Polanski's pregnant wife was murdered by the Manson Family.

D. The Movies on this List That Are Massively Overrated

Notes: I fucking hate Woody Allen.  It has nothing to do with any crimes he may or may not have committed.  I just hate every single film he's ever directed, starred in, or had anything to do with.

Halloween is a lot like A Clockwork Orange.  People gush over it, but the people doing the gushing probably haven't seen it in a while.  Even during the 70s there were much better horror movies.

E. The Movies on This List That are Just BAD

Notes: I can't figure out why someone put The Ruling Class on this list.  It never won any awards, it was never particularly favored by critics, and it is CRUSHINGLY BORING.  I made it about halfway through and gave up.

The Way We Were was a calculated attempt to make Barbara Streisand into (more of) a star.  In this regard it could be considered an inferior version of A Star is Born, which at least featured a male lead that Streisand had some kind of chemistry with.  The Way We Were just makes you feel sorry for Robert Redford. 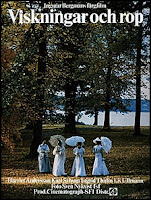 F. The Movies on This List That Were So Depressing I'm Sorry I Watched Them

Notes: Ingmar Bergman... are Swedish people really like that?  I certainly hope not.  I found Scenes from a Marriage slightly easier to sit through, but Cries and Whispers, which features a woman slowly dying of an agonizing disease, might have been more agonizing than the disease featured in the movie.

G. The Three Movies on this List I Couldn't Find

Notes: The first two of these movies, like The Conformist and Amarcord, are Italian films about fascism.  Day for Night is a film by Truffaut.  All won or were nominated for foreign-language Academy Awards.

H. Movies That Should Have Been on this List, But Weren't