Some Other Movies From 1999

For most of 1999, I was having a pretty good time.  During the Seattle portion of that year I was living just north of the University of Washington, getting stoned and getting laid... and occasionally attending classes.  During the Taiwan portion of that year I was learning about life in Taiwan, dating, and eventually meeting the woman who is still my wife, 20 years later.

The five biggest movies of 1999 were Star Wars Episode 1: The Phantom Menace, The Sixth Sense, Toy Story 2, The Matrix and Tarzan (the Disney cartoon).  I can remember seeing The Phantom Menace in the theater and thinking it was BAD.  I can also remember seeing Tarzan not long after, and liking it.  The Sixth Sense remains M. Night Shyamalan's best movie, and The Matrix was undoubtedly the best blockbuster of that year.

Critical favorites were American Beauty (great movie), The Insider (also great), Magnolia (good, if overwrought), and The Green Mile (excellent).  An underrated movie from that year was Boys Don't Cry, a movie that introduced me (and most of the movie-going public) to Hilary Swank.

For worst film I'd have to nominate Kevin Smith's Dogma.  Damn that movie was bad.  Just thinking about Ben Affleck's soliloquy in the parking garage makes me cringe.  Also the rest of that movie's dialogue.  Also Alanis Morissette.  Also its theology.  In a word: Yikes. 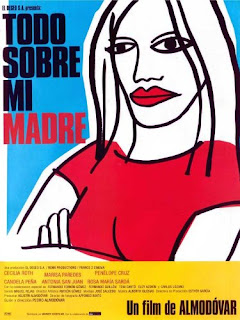 1. All About My Mother

One of the weirder movies I've seen lately.  A woman from Barcelona takes a walk on the wild side (in the larger, Lou Reed sense of the term) after tragedy strikes.  Pedro Almodovar directed.

I'm not at all familiar with Spanish directors or Spanish films, but this one has me intrigued.  Are any of Almodovar's other movies this good?  Are there other Spanish directors I should know about?  If I learn the answer to either of these questions, I'll be sure to write about it here.

A boy becomes friends with a giant extraterrestrial robot during the Cold War.  I'd seen bits of this movie before, but never sat down and watched the whole thing until recently.  It's ok.  Not awesome.

Fun Fact: You may remember seeing the Iron Giant in Steven Spielberg's Ready Player One.  He/it was only in that movie because the filmmakers couldn't get the rights to Ultraman.

I suppose after having Martin Lawrence star as a cop who occasionally impersonates criminals in Bad Boys, it made sense to have him star as a criminal impersonating a cop in Blue Streak.  It's completely derivative, and all of the cops fooled by Lawrence are raging idiots, but his performance in this movie is still funny.

Noirish murder mystery set in virtual reality.  It's surprising this came out the same year as Existenz and The Matrix.  The three movies have a lot in common, and The Thirteenth Floor might also remind you a bit of Dark City, or the even older Tron.  It's been overshadowed by all of those other films, and critics hated it in 1999, but I thought it was pretty good.  My only complaint is the virtual reality device, which looks really cheap.

It would be easy to dismiss this movie as a female version of One Flew Over the Cuckoo's Nest, but Winona Ryder and Angelina Jolie are so great in it.  James Mangold's direction is also pitch perfect.  Definitely one of the best movies of 1999.

6. The End of the Affair

I highly recommend the novel, which was one of the best and most personal things that Graham Greene ever wrote.

The movie?  It's still good, but not as concise as the novel is.  Director Neil Jordan, apparently unsatisfied with the minimalistic plot present in the novel, felt compelled to add embellishments to the story which detract - to some extent - from what was originally a more primal tale of love and jealousy.  Ralph Fiennes and Julianne Moore are very convincing in their roles, but the movie seems to meander a bit, and doesn't seem to end in the right place.

Black comedy in which a high school girl makes a devil's bargain after learning of a murder.  It's alright, but it lacks the insightfulness of movies like Edge of Seventeen or Mean Girls.  I'm also not buying the ending.

Bridget Fonda and Bill Pullman try to catch a giant crocodile living in Maine.  The wonderful thing about this movie is that it KNOWS how ridiculous it is.

Fun Fact: Bridget Fonda would appear in five more movies before her retirement from acting in 2001.  The most famous of these was probably Kiss of the Dragon, a movie featuring Jet Li.  In 2003 she married Oingo Boingo frontman Danny Elfman.

Low budget exercise in international finance.  Ewan McGregor stars as a young banker sent by his bank to Singapore.  He gets in over his head fast, and has to cover his losses by using ghost accounts.  It's not exactly absorbing, and if you don't pay close attention to the banking jargon it'll go right over your head, but it's not bad, either.  If you've already seen The Wolf of Wall Street and The Big Short you might like this one.

Hindi film.  A young man goes to Bombay (Mumbai) to make his fortune.  And because it's a Bollywood movie someone has to fall in love and songs must be sung.  It's interesting from a sociological perspective,  Govinda is a great leading man, and the songs - what really make or break any Bollywood movie - are very catchy. 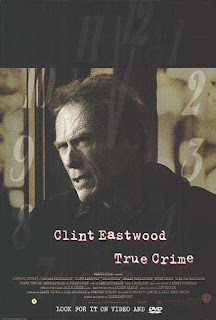 One That's Sadly Forgotten in Discussions of Clint Eastwood's Filmography

If this movie has a thesis it's that "bad" people often do good things, and "good" people often do bad things.  Moral ambiguity, in other words.  It's executed (if you'll forgive the pun) flawlessly, and Eastwood is at his best as an investigative reporter assigned to interview a man on death row.  It was one of the bigger movies of 1999, but no one seems to talk much about it now. 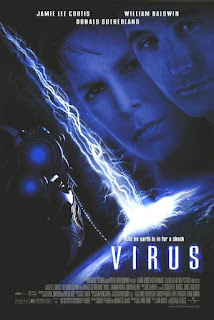 Two Movies That Just Were

Virus is a movie that struggles heroically against itself.  It wants desperately to entertain you, but in its heart it knows that it's neither very original nor very well executed.

Think Aliens meets The Thing, but with some kind of techno-organic virus substituted for the more organically minded Thing.  Jamie Lee Curtis stars to cement the John Carpenter connection, with William Baldwin and Donald Sutherland in supporting roles.  It was made before cgi was in widespread use, and the special effects aren't all that special.

Donald Sutherland must have had a blast making this movie.  His performance in it, by the way, has to be the most Canadian thing ever.

Fun Fact: This is a comic book movie!  Chuck Pfarrer, who wrote the comic, also co-wrote the screenplay to Virus.  In the comic book it's a Chinese vessel, not a Russian vessel, that gets taken over.

Jackie Chan stars as a rich tycoon in Hong Kong, with Shu Qi as a poor Taiwanese girl trying to win his affection.  It's forgettable in the way that the more innocuous Hong Kong movies always are, and the way they sped up the film during the fight scenes is painfully obvious.

Fun Fact #1: Jackie Chan filmed this the same year as the first Rush Hour.  He regarded Rush Hour as something he did "for the money," and this movie as "his baby."  Just goes to show that even movie stars often don't know which of their movies are actually good. 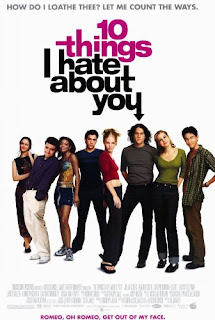 Like all teen comedies, this movie features a lot of people who would be more famous later.  Julia Stiles, Joseph Gordon-Levitt, and even Heath Ledger.  Trouble is that the plot doesn't make a great deal of sense, and the editing makes what would have otherwise been snappy bits of dialogue seem ill-timed.  It might be an adaptation of Taming of the Shrew, but it's a far cry from Shakespeare.

Fun Fact: Julia Stiles was in more than one cinematic attempt at Shakespeare.  She also appeared as Ophelia in 2000's Hamlet, and as Desdemona in 2001's O, based on Othello.

The Poseidon Adventure meets Jaws.  Weirdly enough, LL Cool J leads a cast consisting of Samuel L. Jackson, Thomas Jane and others against a genetically enhanced trio of sharks.  The way various characters die, and the order in which they die, is extremely predictable.

A high school student gets his hand possessed by a demon.  It's very low budget, and the gags would only be funny if you're in your teens.  Jessica Alba's in it for a bit, but that bit's not worth sitting through the rest of the movie for.

Fun Fact: Somehow this movie cost $25 million to make, and only grossed about $4 million. 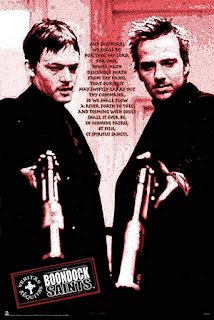 One So Bad It's Good

The making of this movie must have been a disaster.  You can just tell from the finished product.  "Missing" action sequences, strange character choices - it's all there.  Willem Dafoe does his best with the material, but at the end of the day he's still just playing a watered-down version of Gary Oldman's character in The Professional.

Fun Fact #1: Mark Wahlberg, who would later appear in The Departed, was almost cast in this movie.  He had the good sense to pass on it in favor of Boogie Nights.  The Boondock Saints, like The Departed, is set in Boston and features Irishmen taking on organized crime.

Fun Fact #2: Ron Jeremy, adult film star of note, is in this movie for a few minutes.  He also worked as a consultant on the set of - you guessed it - Boogie Nights.