"The Godmakers" by Frank Herbert 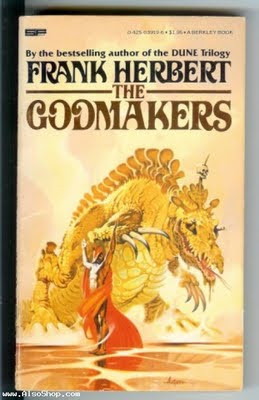 "The Godmakers" was first published in 1972, after both "Dune" and "Dune Messiah." It is, however, composed of several short stories that appeared much earlier, and were later combined to form this novel.

As the title suggests, the book outlines the creation of a deity, in the person of Lewis Orne. Lewis Orne works for a galactic organization in charge of maintaining peace, and in this capacity proves his skills admirably. He is promoted quickly through the ranks, and is eventually summoned to the planet Amel, where he learns that he will be the next God, or Messiah, or Prophet, or all three.

Unlike "Destination: Void," this book is more action-oriented, and less focused on explaining things. Herbert never bothers to explain exactly how or why Lewis Orne is the next "God," and I think that leaving this process to our imaginations is one of the book's many strengths. The story flows smoothly from beginning to end, and I never found myself bored by this one.

This novel is something like a streamlined version of "Dune," with all the random philosophizing and political subplots removed. As such, it is an immensely readable book, and probably one of the best things Herbert ever wrote. It has the kind of depth you would expect from a Frank Herbert novel, but avoids the digressions and overcomplicated subplots that bog down many of his other books.
張貼者： Times Three 於 下午10:38