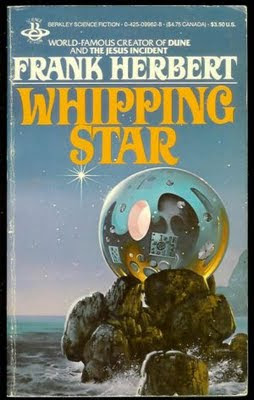 "Whipping Star" was first published in 1970, and it is part of Herbert's "ConSentiency" series, which lies outside the Dune continuum. The ConSentiency universe is populated by all manner of alien races: some human, and some so remote from our own that communication becomes a matter of life and death.

"Whipping Star" is a kind of detective story, and in some respects it resembles Asimov's later Robot novels. The protagonist has discovered an alien life form, marooned on a distant planet, and the fate of the known universe rests upon his ability to communicate with this strange and incomprehensible being. The villain of the book is one of those "insectoid" women that are found in many Frank Herbert novels, a woman who will go to any length to satisfy her masochistic urges.

I am not a big fan of the mystery/suspense genre, and in this respect "Whipping Star" already has a mark against it. Detective stories usually seem so contrived to me, and no matter how clever the ending, there are always one or two improbabilities that call the protagonist's line of reasoning into question. Combining the detective genre with the sci-fi genre only seems to magnify this fault.

"Whipping Star" is OK, but not a book I would recommend. Herbert wrote better novels, and there are reasons that this one is among his more obscure offerings.
張貼者： Times Three 於 上午10:08