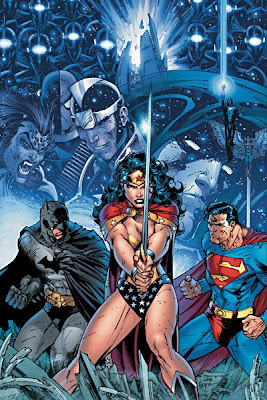 As said before - by many others besides myself - following DC's apocalyptic miniseries can be a lot of work. Back in the day you could have said, "I read Crisis on Infinite Earths..." And that was it. You were done. But since then we have seen "Identity Crisis," "Crisis in Time," "Infinite Crisis," "52," and most recently "Final Crisis," not to mention all of the crossovers and "countdowns" related to the above.

I still think that "Crisis on Infinite Earths" was the best of the bunch. It was groundbreaking for the time, it was well-written, and George Perez's art was fantastic. It was also the beginning of a new era - at least at the time. Before DC chose to reinvent the apocalyptic wheel over and over, the first "Crisis" meant to establish a new, and lasting, continuity. 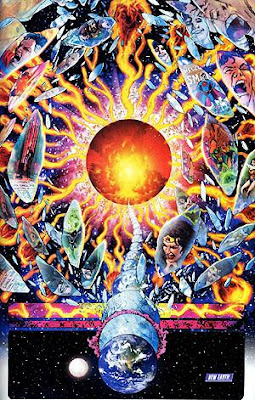 After "Crisis on Infinite Earths," I think "Infinite Crisis" is the best of these series, even though by this point everyone knew that DC would probably be hauling out yet another end of the world event the following year. Geoff Johns' writing is superb, and Phil Jiminez does an excellent job of filling George Perez's shoes. It's not as trippy or intellectual as "Final Crisis," but what it lacks in intellect it more than makes up for with strong, consistent characterization. This, I think, is where "Infinite Crisis" outshines "Final Crisis." Whereas "Final Crisis" was a story full of great ideas, "Infinite Crisis," is a story driven by fewer, more fully explained concepts. It perhaps aspires to less, but acheives more.

For those unfamiliar with the story, it involves the return of Superman-2, Lois Lane-2, Alexander Luthor, and Superboy-Prime from pre-Crisis continuity. These four plan to reestablish the multiverse in the wake of the Anti-Monitor's destruction, as a means to realizing a more perfect Earth. Along the way, Superboy-Prime becomes one of the greatest villains in DC's roster, and the rest of the DC universe has to team up to stop him. The part where Superboy massacres the Teen Titans is priceless, and the dramatic moments are built up with an astonishing level of precision.