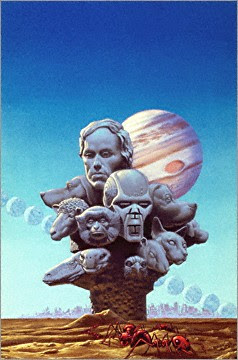 My dad introduced me to Clifford D. Simak. I read his "Worlds of Clifford Simak," and then moved on to this book.

"City" was first published in 1952. It is essentially a collection of short stories, all exploring the theme of consciously directed evolution. Through the stories of "City," Simak offered the world his vision of utopia, and his alternative to the destructive human habits exemplified in the Second World War.

It's a good, if implausible set of stories. It starts off with the end of human cities, and the movement of humankind from the old population centers to a more rural kind of existence, centered on robot labor. From there we move to Jupiter, where humanity contemplates a transformation from one type of organism to another, while on Earth a man creates a race of talking dogs. At the same time, a race of mutants poses a threat to human security, while a mutant experiment triggers a startling evolution within a single ant hive.

What we end up with is a future where talking animals, robots, and insects rule the earth, in a world long abandoned by mankind. A single robot acts as puppetmaster over the various races, guiding them towards a destiny that is never fully explained.

I liked this book, but it doesn't bear thinking about too deeply. Simak wasn't as well-versed in the theory of evolution as other authors, and such grand, sweeping epics of genetic destiny are better represented in books like "Dune."