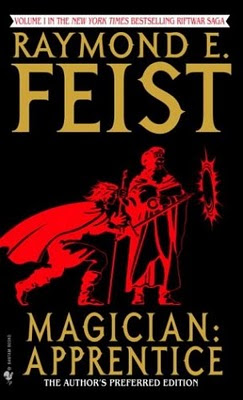 A while back I read Mr. Feist's "Krondor: the Betrayal." I thought it was a good book, even if the plot elements were largely borrowed from the computer game, and not creditable to the author.

"Magician: Apprentice" is the first book he wrote, and as such is entirely his creation. It was written WAY back, in 1977, when I was three years old.

The novel details the adventures of Pug, the magician's apprentice, and his friend Tomas. Pug and Tomas grow to manhood in the village of Crydee, and after being apprenticed to different masters, they set forth on a series of adventures. These adventures are loosely framed within the Riftwar chronology that the author set out in subsequent books. I read the "Author's Preferred Edition," and details were added to make this novel fit in better with his later novels.

Some of the vocabulary used in this book is silly, but as such is not unusual for the genre. All of the "miscreants" and "knaves" thrown about don't quite mesh with the Modern English used to frame the story. Feist's style of writing comes across as warmed-over Tolkein, without either the richness of Tolkein's language or Tolkein's talent for world-building. Of course comparing just about any fantasy writer to Tolkein is like comparing the ant to the ant-hill, but I think a less archaic vocabulary would have made for a stronger book.

Just the same, the author spins a good tale. I read this one fast, and I never found it boring. The characters are consistent, the plot hums along, and despite questionable uses of the English language it shows a strong sense of craftsmanship throughout. I would give it 7 stars out of 10, and if I have the time I'll probably read one of the many, many sequels.
張貼者： Times Three 於 上午9:19