"Civil War: Marvel Universe" by Dan Slott and Many Others 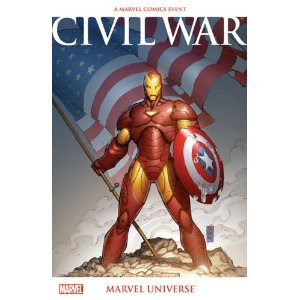 I'm new to Marvel's "Civil War" comics, so please excuse any inaccuracies that may be found here.
As I understand it, this line of comic books revolves around the Superhuman Registration Act, a proposed law (or is it amendment?) that would require those with paranormal abilities to register with the U.S. government. Tony Stark, as head of S.H.I.E.L.D., is the leading proponent of this act, which has divided the superhero community right down the middle. His chief opponent is Captain America, who views the act as an impingement upon basic American civil liberties.
It's an interesting premise, and also a nice vehicle for exploring the freedom vs. security issue so obvious in our own society. It is, moreover, new to the world of comics, though it has been foreshadowed in much older X-men story lines. I'm not sure if the writer(s) of the original "Civil War" made the connection between the Superhuman Registration Act and the Mutant Registration Act, but it's hard to view the similarities as sheer coincidence.
This particular installment doesn't have much of a story. It's mostly just random battles between superheroes on either side of the fence. At one point USAgent gets sent to Canada (very ironic!), and the usual array of public edifices are smashed to bits at the hands of dudes in (very) tight costumes. Iron Man/Tony Stark decides to reform the Avengers at the end, and that's about it.
The last part of this one features Spider Woman, who, along with Mary Marvel and Wonder Woman, is one of the sexiest comic book heroines ever. I would think that her ENORMOUS breasts would be a handicap in the fight against crime, but apparently super-heroines have access to the kind of sports bra technology that regular women can only dream of. 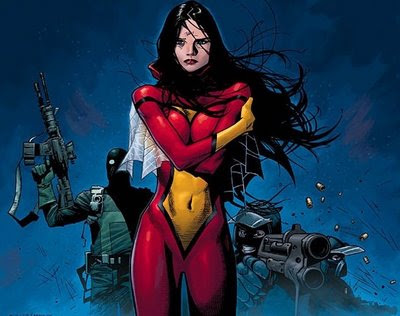