"Green Lantern: Rage of the Red Lanterns" by Geoff Johns and Others 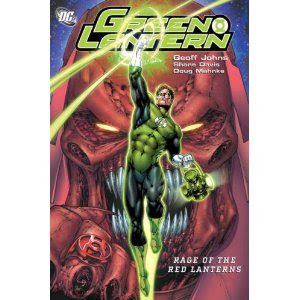 I am not now, nor am I ever likely to be, a Green Lantern fan. Setting aside the Marvel vs. DC rivalry for a moment, Green Lantern is just LAME. His power is silly, his costume is almost as silly, and finding a credible opponent for the Green Lantern is always going to be an uphill battle.
So I was prepared not to like "Rage of the Red Lanterns," but to tell the truth, it's not all that bad. Geoff Johns is a good writer, and I can see why DC places so much faith in him. Many of the artists who contributed to this TPB are also very good. The story was well though-out, and any problems I have with this one stem from the above-stated FACT that Green Lantern is very, very lame.
I'm just wondering why it took DC so long to realize that GL is only going to be halfway interesting if he has a halfway interesting foe. The whole red/blue/yellow/mauve lantern thing should have been done years ago, but for some reason it took DC decades before it realized that SINESTRO wasn't enough to sell Green Lantern comic books.
Oh well. At least they're starting to figure out what works and what doesn't. It sure did take them long enough.
This TPB is one of the many preludes to "Blackest Night," which I have yet to read. The Guardians of the Galaxy (who look GAY) have created an "Alpha Corps" to oversee the other Green Lanterns, and Atrocitus, the Red Lantern, makes a bid for the life of Sinestro. The whole thing is very operatic, and much better than I expected.
I'll probably read "Blackest Night" whenever I come across it. This one was surprisingly not bad, and it makes me understand why so many GL fans were so hyped about the movie. 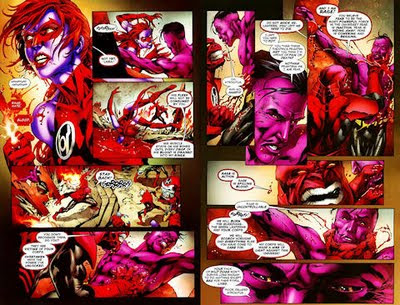