Is this "Chick-Lit?"  I'm pretty sure it's Chick-Lit.  Whatever it is, it's definitely not the kind of book I usually read.  But you know, sometimes dudes like me get tired of reading about artificial intelligences, sex and crime, so it can be nice to read a book like The Help. 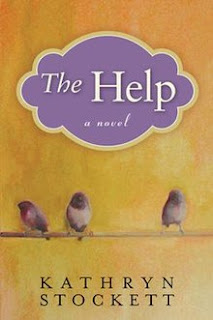 "Rule Number One for working for a White Lady.  Minny: it is nobody's business.  You keep your nose out of your White Lady's problems, you don't go crying to her with yours - You can't pay the light bill?  Your feet are too sore?  Remember one thing: white people are not your friends.  They don't want to hear about it.  And when Miss White Lady catches her man with the lady next door, you keep out of it, you hear me?"

...and look at this handy Reader's Guide in the back of the book!  Let's discuss!  Spoiler alert: these questions and my responses to them give away a lot of the books' plot, but if, like me, you've seen the movie already there aren't any big surprises here.

There are three main characters in the book.  There's Skeeter, a young white woman with dreams of becoming a journalist; there's Aibileen, an older black woman who works as a maid in a white household; and there's Minny, a younger black woman who also works as a maid for a white family.  Of the three I'd pick Aibileen.  She's not as neurotic as Skeeter, and the way in which she expresses her discontent is more pragmatic.

2. "What do you think motivated Hilly?  On one hand she is terribly cruel to Aibileen and her own help, as well as to Skeeter once she realizes that she can't control her.  Yet she's a wonderful mother.  Do you think that one can be a good mother and, at the same time, a deeply flawed person?"

I'm not seeing the "wonderful mother" part in the book.  She obviously cares about her child more than Elizabeth Leefolt does, but I don't see this care as exceptional.

What do I think motivated her?  People will always feel a need to uphold the status quo, especially when they're sitting on top of the social pyramid.  Hilly might not have phrased it in such terms, but she was obviously trying to consolidate her own position.

And yes, someone can be a good mother AND a deeply flawed person.  I have personal reasons for saying so... and more than that I will not say.

3. "Like Hilly, Skeeter's mother is a prime example of someone deeply flawed yet somewhat sympathetic.  She seems to care for Skeeter - and she also seems to have very real feelings for Constantine.  Yet the ultimatum she gives Constantine is untenable, and most of her interaction with Skeeter is critical.  Do you think Skeeter's mother is a sympathetic or unsympathetic character?  Why?"

The real question is whether Skeeter's mother cares for other people as people, or whether she views them as her personal property.  In the beginning of the book it's difficult to gauge her appreciation for other people, though by the end I think she comes across as sympathetic.

4. "How much of a person's character is shaped by the times in which he or she lives?"

At a certain point answering this kind of question becomes a debate centered around nature vs. nurture, or even free will vs. predetermination.  You're also asking how much of a person's character is shaped by the times they live in, versus how much of the times they live in are shaped by their character.  I like to think that people can always take "small steps" toward the kind of world they want to live in, though the greater thrust of history - whether framed in the context of a decisive individual/leader or not - is determined more by the countless individual choices which are later interpreted as a collective will.

5. "Did it bother you that Skeeter was willing to overlook so many of Stuart's faults so that she could get married, and that it wasn't until he literally got up and walked away that the engagement fell apart?"

No.  Anyone who hasn't been a fool for love hasn't really lived at all.

6. "Do you believe that Minny was justified in her mistrust of white people?"

Of course.  Why would she have trusted them?

7. "Do you think that had Aibileen stayed working for Miss Elizabeth, Mae Mobley would have grown up to be racist like her mother?  Do you think racism is inherent or taught?"

Again, nature vs. nurture.  I think it's very likely she would have grown up to be racist like her mother.

But is racism inherent in all people?  I think to some extent it is, though certain types of racism are strengthened by the social institutions in which people live.  People tend to think in categories, and even though race is a rather unscientific category it can - unfortunately - be a convenient way to group people.

8. "From the perspective of a twenty-first century reader, the hair-shellac system that Skeeter undergoes seems ludicrous.  Yet women still alter their looks in rather peculiar ways as the definition of "beauty" changes with the times.  Looking back on your past, what's the most ridiculous beauty regiment you ever underwent?"

Back in junior high I had a brief love affair with mousse and styling gel.  I really layered the stuff on.  Looking back on it now, I'm sure my hair looked gross.

9. "The author manages to paint Aibileen with a quiet grace and an aura of wisdom about her.  How do you think she does this?"

10. "Do you think there are still vestiges of racism in relationships in which people of color work for people who are white?"

Of course there are, at least with respect to prevailing attitudes.  I'm not sure, however, if this question refers to every instance of a colored person working for someone who is white.  This question of race is also an aspect of human behavior, so if you were going to define "vestiges of racism" as prejudice/preconception, then I suppose there are vestiges of racism is every human relationship, not just those in which colored people work for whites.

11. "What did you think about Minny's pie for Miss Hilly?  Would you have gone as far as Minny did for revenge?"

If you'll excuse the pun, this is the one part of the book I had trouble swallowing.  There is just NO WAY someone in her position would do that unless they were fixing to get lynched.  There is NO WAY Hilly would have quietly tolerated that.  We're talking about Jackson, Mississippi in the early 60s, and those white supremacist types didn't mess around.