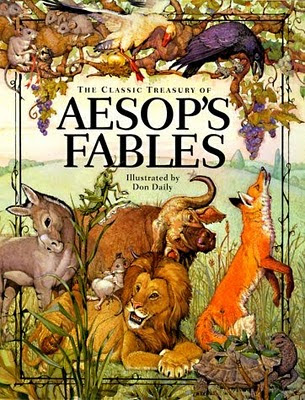 Aesop lived in Ancient Greece, 500 or more years before Christ. He was supposedly a slave, possibly deformed, and there is anecdotal evidence that he was condemned to death by the Oracle of Delphi. Long after his death, his stories - many of which were not even written by him, and didn't even originate in Greece - were collected into the group of tales we are familiar with today.

I can't really say either good or bad about this book. It is just a collection of disconnected stories, many of whose "morals" were lost on me. It's an easy read though, and I finished it in a few hours. The version I read was the Penguin Classics version, though there are many "kid friendly" versions out there.
張貼者： Times Three 於 下午7:12