"Beyond Oil" by Kenneth S. Deffeyes 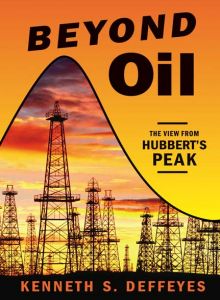 "Hubbert pointed out that Spain was inadvertently devastated by New World gold and silver.  During the years it plundered the New World's riches, Spain could sell gold and silver to other countries and buy anything: food, manufactured goods, art objects.  By the time the flow of gold and silver ceased, Spain had lost the ability to produce anything and permanently lost its place as a world power.  Hubbert's fear was that cheap oil and gas would permanently erode the industrial world's manufacturing and agricultural capability.  Economists, in their all-seeing wisdom, point out that the U.S. economy today is much less dependent on energy than it was in 1980.  Today, 92 percent of our economy provides services; petroleum is not supposed to matter.  I shudder, remembering Hubbert's talking across a cafeteria about Spain.  As long as the world will trade us oil in exchange for Microsoft software and Walt Disney movies, we're in fat city.  Hearing that the U.S. service economy is being outsourced to India should be accompanied by Prewett bugling 'taps.'"

"Beyond Oil" first appeared in 2005, just before the peak in world oil production predicted in 2006.  The author, both a geologist and oilman, outlines the problem of oil scarcity in a world economy predicated upon the discovery, marketability, and widespread use of fossil fuels.  At no time does this book speculate upon the subject of global warming.  Instead, what the author does is lay out the history behind our dependence on oil, the very real problem of scarcity hanging on the horizon, and proposed alternatives to the use of oil and natural gas.

Alternative energy sources are discussed in detail.  Hydrogen, nuclear power, coal, and tar sands are cataloged and presented for our inspection - warts and all.  What emerges is a picture of a world in crisis, and this crisis is due to our failure to explore more realistic options in the face of a world oil shortage.

This book offers an excellent description of how we use natural resources to keep our economies going.  It is well thought-out, well researched, and the author has excellent credentials to back up his arguments.  What makes this book even more relevant are many of the troubles that the U.S. economy has been experiencing since this book appeared.  After reading this book, I can appreciate more of President Obama's economic policy, even if I haven't always agreed with it.

This book gets a bit "scientific" at times (yes, there are equations), but it's short, and I read it through in a couple of days.  I'm not going to say that our collective futures hinge upon reading "Beyond Oil," but it does offer a refreshingly simplistic look at a very, very complex problem.
張貼者： Times Three 於 下午5:33