"Arabian Nights" by (presumably) Some Guys from Arabia 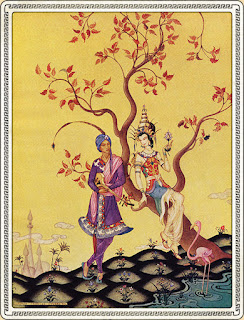 I read the Richard Burton translation.  If you've never heard of Richard Burton, let me just say that his life in many ways resembled the stories he so lovingly translated.

The overarching plot of The Arabian Nights is easily explained.  The king Shahryar, shamed by an unfaithful wife, swears to murder every woman he sleeps with to prevent their infidelity.  Late in his reign the beautiful Sheherazade falls into his clutches, and all appears lost.  Sheherzade then fends off the king's murderous intentions by telling him a series of stories.  In some versions her stories number 1,001, thus the alternate title of this collection: The 1,001 Nights. 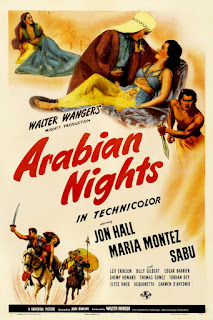 The most famous section of The Arabian Nights has got to be "Aladdin and His Lamp," which has been adapted into film countless times.  "Ali Baba and the Forty Thieves" is another influential tale, and another story within The Arabian Nights was the inspiration for Shakespeare's Taming of the Shrew.

I'm guessing that anyone taking a class on the "golden age" of Islam is compelled to read this book.  They're probably also compelled to comment upon the sex, sexism, violence, and racism in this collection of stories.  To be sure, there's plenty of sex and violence here.  The Arabian Nights portrays a world where women are far from equal to men, and where the worst thing a woman can do is sleep with a black man.

But these criticisms, however valid, do little to diminish the entertainment value of The Arabian Nights.  It's a terrific book, even if the constant interludes between stories grow annoying.  If you haven't read [the English translation of] The Q'uran, I would recommend reading it alongside this book.  Burton's own translation of The Kama Sutra would also be good to read alongside this one, especially since both books cover similar territory.
張貼者： Times Three 於 下午6:03