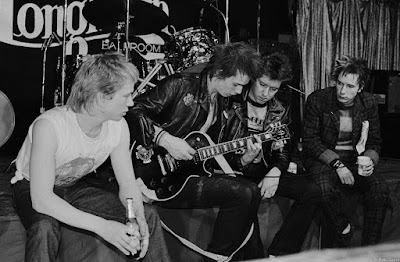 For further background on the year in film please refer to the Some Other Movies From 1978 entry.

Some things that happened in 1978:

Linked entries can be viewed in their entirety on YouTube. 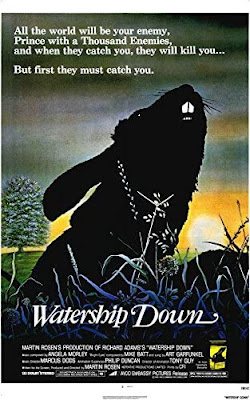 Part rabbit-oriented adaptation of Rudyard Kipling's Jungle Book stories, part unspeakable horror that terrorized a generation.  I can remember watching it when I was little, and it sure gave me some nightmares.  The animation is excellent for the time, and the script was well written. 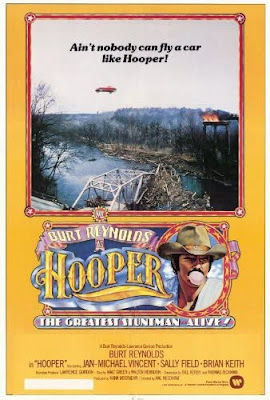 Damn Sally Field was sexy back then.  Hooper, Stay Hungry, Smokey and the Bandit... the list goes on and on.  Sure, she won the Best Actress Oscar the following year for Norma Rae - an honor she truly deserved - but let us not forget how SEXY Sally Field was in the late 70s.

In Hooper Field costars with Burt Reynolds (R.I.P.).  Reynolds plays a stuntman nearing the end of his career, and Fields plays his girlfriend.  It's all silly fun, and those who scoff at the implausibility of the barfight at the Palomino are missing something.  Hal Needham, who knew a thing or two about stuntwork and also directed Reynolds (and Field) in Smokey and the Bandit, directed this one too.

And it really has everything: huge, flared bellbottoms with stars, rocket-powered Trans-Ams, people drinking and driving without seatbelts, doctors smoking in hospitals, "zaniness," and jokes that aren't all that funny but which Burt Reynolds somehow manages to make funny anyway.  In 1978 this movie almost made as much money as Star Wars, and that's saying something.

Fun Fact: After their "bender" Reynolds and co. watch outtakes from Deliverance at his house. 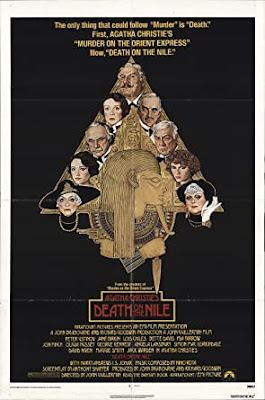 Whatever happened to Lois Chiles?  1979's Moonraker, and then nothing!  Wikipedia says she took a three-year hiatus from acting, and after that Hollywood kind of forgot about her.

Death on the Nile adapts Agatha Christie's famous novel.  Aside from Chiles, Mia Farrow, David Niven, Angela Lansbury and many others make up the cast.  If you liked the recent Knives Out you'll probably also like this one.  The director, John Guillermin, also directed The Towering Inferno.

Fun Fact: Another film adaptation of Christie's novel is due this year.  This version of Death on the Nile is directed by Kenneth Branagh, who is also starring as Hercule Poirot.

2. The Boys from Brazil

On the one hand it's a great premise: Nazis hiding out in South America, and Nazi hunters desperately trying to find them.  On the other hand it's bungled in the execution.  The beginning of this movie is solid, but it somehow fails to generate any kind of tension.  Laurence Olivier's character is a bit too bumbling to be credible, and many of the characters aren't fleshed out to anyone's satisfaction.  And why are the Nazis all speaking English?  In Brazil?  Just to make it easier for people to record their conversations?

Anyway, once it shifts into science fiction mode it gets better.  I liked it, but there are definitely better movies from that year.

Fun Fact: Gregory Peck starred in this two years after The Omen.  In both movies he plays a "father" who sires... EVIL!

Random Thought: A sequel to this movie, told from "Bobby's" point of view could be interesting.  I know they did something similar with Omen II and III, but those movies were distinctly lacking in Nazis.

80% of this movie is excellent, but toward the end there's a coincidence that's really hard to buy into, and it really flubs the landing.  But yeah - up to the last 15 minutes or so it's great.

Peter Hyams directed this movie about a NASA-centric conspiracy.  As this movie is less famous in 2020, I don't want to give away any more than that.  Hal Holbrook, James Brolin and Elliot Gould star.  I'm guessing the studio got nervous about its length, and there were some shenanigans in the editing room.  It's really too bad, because if it had been allowed to run its course it would have been much, much better.

It's a decent horror movie, even if the person who scored it should've been fired.  There are moments where the soundtrack completely destroys the mood - and horror movies are all about mood.

The beautiful Katharine Ross and Sam Elliot (!) star as two Americans mixed up with a group of sinister British aristocrats.  Richard Marquand, the director, would go on to direct both Return of the Jedi (!) and Jagged Edge in the 80s.

Fun Fact 1: The Who's Roger Daltrey appears in this.

Fun Fact 2: Despite winning several awards, Katharine Ross was never as famous as she could have been.  She turned down several high profile roles for various reasons.  Many of these roles went to Jacqueline Bisset, who appeared in The Greek Tycoon (below).  Ross married costar Sam Elliot years after filming The Legacy.  They remain married to this day. 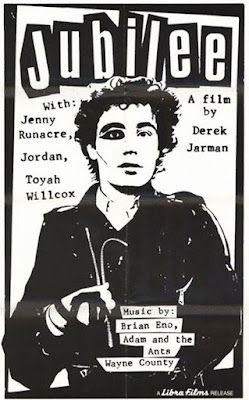 Adam Ant is in this!  Beyond that, it's about... uh... not exactly sure.  You see, there's the queen of England, right... and her fortune teller/court astrologer/whatever he is is telling her about the future... and then it's the future, kind of like A Clockwork Orange but a lot lower-budget... and then... and then...  I dunno.  Watch it if you want to feel "arty?"  I'm not into punk, and some of the acting in this movie is unspeakably bad, but it's nothing if not unusual. 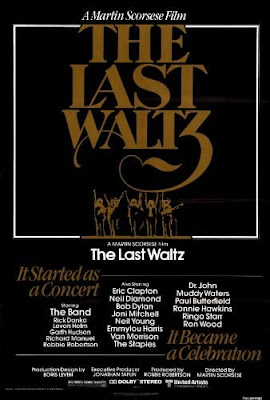 Not Bad, but Just Not My Thing

Martin Scorsese directed this documentary on The Band's last show.  And I'm so NOT into The Band.  Watching this film in 2020, I was moved by their professionalism (that drummer had such a nice, light touch), but the music itself did nothing for me.  The movie FM, as terrible as it is, came out the same year and offers a glimpse at the niche The Band occupied. 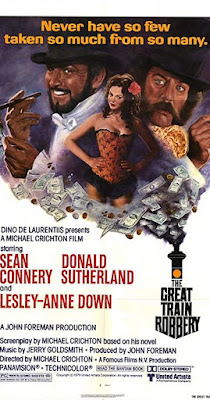 Heist movie featuring Sean Connery, one of his less convincing hairpieces, and Donald Sutherland.  Michael Crichton directed this movie from a screenplay he wrote.  Some of the double entendres are amusing, but this film fails to build any kind of momentum.  The heist at the end just kind of happens, and it's hard to care about it one way or the other.

Aristotle Onassis gets a thinly veiled Jackie Collins/Danielle Steele treatment.  Anthony Quinn stars as the titular tycoon, with Jacqueline Bisset as Jackie Kennedy.  Quinn does his best to elevate the material, but the script just isn't very good.

Fun Fact 1: L. Lee Thompson, who directed this movie, also directed The Guns of Navarone and the original Cape Fear.  He ended his career directing some of Charles Bronson's more forgettable movies.

Fun Fact 2: Despite being cast as a Greek in this and other movies, Anthony Quinn was born in Mexico to an Irish father and a Mexican mother. 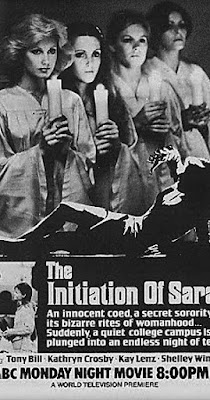 
1. The Initiation of Sarah

FORESHADOWING.  A whole lotta foreshadowing.  And before you can say "Shelley Winters" or "Morgan Fairchild," Sarah is using her "gifts" for EVIL.  Yup.  Straight up evil.  It'll remind you a bit of Carrie, though in this case the "powers of the mind" have been exported to a college setting in which sororities battle for... something.  I'm not sure what.

Fun Fact: This movie was remade for TV in 2006.  Morgan Fairchild was also in the remake.

2. Devil Dog: The Hound of Hell

Hey, it's Richard Crenna!  Just a few years later he'd appear in First Blood as Colonel Trautman.  In that movie it was strictly military uniform, while in this movie he's clad in the finest men's wear the 70s had to offer.  Just check out that pantsuit.  Damn, Richard Crenna, you looking GOOD!!

The most hilarious part of this movie is the showdown at the end.  I don't want to give it away, but when the devil dog shows its true colors it's hysterical.

Japanese Star Wars ripoff with a racially mixed cast.  It's not as memorably bad as Starcrash (below), but it sure isn't Star Wars.  I had some trouble following the plot, but apparently an oppressed people disperse some kind of "seed" throughout the universe, and those who come upon their seeds become one of the seven heroes that will save the universe from the bad guy.

Fun Fact: Sonny "Street Fighter" Chiba is in this.

It's somehow even shoddier than the first TV movie.  Nicholas Hammond reprises his role as Peter Parker.  In this one a "Mr. White" is after an atomic bomb, and - as one would expect - a whole lotta coincidences lead up to that not happening.  My greatest complaint about this movie is that there's no karate fight between Spider-man and Mr. White.

Fun Fact 1: When the security guards are chasing Spider-man into/out of the lab, one of them says something to the effect of "That's Dr. Banner's lab!"  The implication being that Peter Parker is a student in the college where Bruce Banner is a professor.

Fun Fact 2: Joanna Cameron, who also appears in this movie, was the star of The Secrets of Isis TV show.

Fun Fact (?) 3: I'm fairly certain the Western-themed backlot toward the end of the movie is the same backlot seen in Hooper (above). 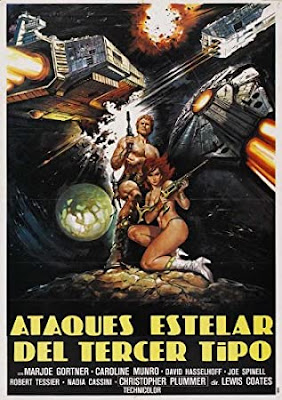 So Bad You Gotta See It

SUPER low budget attempt to cash in on the Star Wars craze.  Marjoe Gortner, that titan of 70s B movies, stars as an... android?  Or something?  Caroline Munro, seen to better effect in The Spy Who Loved Me, costars as his copilot.  And hey, it's David Hasselhoff!  This is pre-Knight Rider folks - something for the history books.

Yet the true stars of this less-than-stellar Star Wars knockoff are the unspecial effects.  Apparently unsatisfied with the white stars seen in George Lucas' far superior film, the person in charge of special effects on this movie made them rainbow colors.  The models?  They were tiny in reality, and they look even tinier on film.

Fun Fact 2: Caroline Munro also appeared in 1967's non-Eon production of Casino Royale - so she was a Bond girl twice over.  Much later on, in the 80s, the appeared in Adam Ant's video for "Goody Two Shoes." 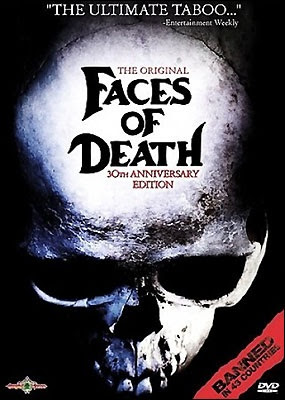 I gave it a try.  I got to the part where they started cutting corpses open.  Then started thinking about the barbecue I had earlier for dinner.  That was it for me.

People who grew up with the internet will probably have a hard time understanding how this series developed the following it did.  Just cast your mind back to 1978: no internet, only four or five channels, and the home video revolution was just around the corner.  In other words, it was a lot harder to see dead people and explicit sex back then.  In 2020 you can just type whatever horrors you're looking for into Google and you'll get at least a few authentic images.  In 1978 people had to use their imaginations a lot more.