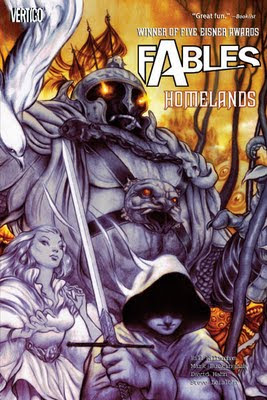 I can remember meeting Bill Willingham at a comic book convention, more than 20 years ago. Back then he wasn't well known. He had done a few annuals for Marvel and DC, but no one besides me seemed to know who he was. Few comic fans bothered to approach him back then, and when I spoke to him he seemed convinced that I had him confused with someone else.
Of course these days he's a lot more famous, and there'd be a long line of people at the local convention, all dying for an autograph from the creator of "Fables." I think his fame is deserved, especially considering the years he's put into the comic book industry.
"Fables" is something like Shrek meets Sin City. All of the fairy tales are real, and inhabit a place called the Homelands. Occasionally they cross over into our world, and the intersection of the fantastic and the mundane can be a lot of fun. Some of the stories in "Fables" are very clever, and I particularly enjoyed the one where Jack Horner becomes a movie executive. Willingham works hard to differentiate what he does from the normal Marvel and DC fare, and his hard work shows.
I am looking forward to reading more of this series in the future. It is a nice alternative to the usual superhero battles.
張貼者： Times Three 於 上午4:17