"So Long, and Thanks for All the Fish" by Douglas Adams 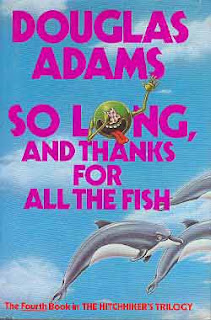 "There is a feeling which persists in England that making a sandwich interesting, attractive, or in any way pleasant to eat is something sinful that only foreigners do.


"'Make 'em dry' is the instruction buried somewhere in the collective national consciousness, 'make 'em rubbery.  If you have to keep the buggers fresh, do it by washing 'em once a week.'


"It is by eating sandwiches in pubs at Saturday lunchtime that the British seek to atone for whatever their national sins have been.  They're not altogether clear about what those sins are, and don't want to know either.  Sins are not the sort of things one wants to know about.  But whatever sins there are are amply atoned for by the sandwiches they make themselves eat."

"So Long, and Thanks for All the Fish" came out in George Orwell's least or most favorite year, depending on whether you are discussing soul-crushing authoritarian dictatorships or novels that made his career.  It is the fourth book in the "Hitchhiker" series, leaving me with only the fifth and final book yet to read.

Despite what the quote above might lead you to expect, it's not all that funny.  Arthur Dent finds his way back to Earth, starts to think that his misadventures in other parts of the universe might have all been a dream, and then a huge alien robot shows up and promptly takes a holiday by the seaside.

以電子郵件傳送這篇文章BlogThis!分享至 Twitter分享至 Facebook分享到 Pinterest
標籤： and thanks for all the fish, douglas adams, hitchhiker's guide to the galaxy, so long
位置： Taiwan