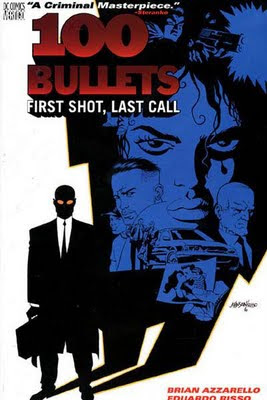 The premise behind "100 Bullets" is fairly simple. A guy named Agent Graves shows up, tells you who was responsible for your own downfall, hands you a gun with 100 rounds, and tells you that you are free to take revenge without fear of legal repercussions.

Naturally you don't believe him at first, so you tread carefully, and in the end you are left with the choice of whether or not to use the gun. Some people do, and are ushered onward to another destination. Others don't, and often find out what happens to those who play with fire.

There are no good guys in "100 Bullets." There are no superheroes. There are only ordinary people, some of them criminals, some of them victims of circumstance. Some of them are both. Ultimately it comes down to a choice for each of them, and it is this choice that defines who they are.

This is one of the best thing that Brian Azzarello has ever written, much better than his work on Superman and most other mainstream comics. It might not be as good as his "Joker," but that would be a hard one to top. I liked this story a lot, and I would be eager to read more.

Eduardo Risso's art also works a lot better in this context. Whereas he came off looking like a Frank Miller clone in some of his DC work, here his style stands out, and tells a good story without being overly flashy.

"100 Bullets" isn't one of the best comics I've ever read, but I would recommend it if you've already exhausted classics such as "Wanted," "The Ultimates," or "Astro City." 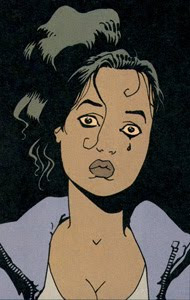