I realize that I lean a bit too heavily in the direction of superhero and horror movies.  By way of addressing this imbalance, I'd like to talk about some of my favorite movies.  Some of these movies will of course fall within the superhero and horror genres, but I'm thinking about quality here, and not genre. 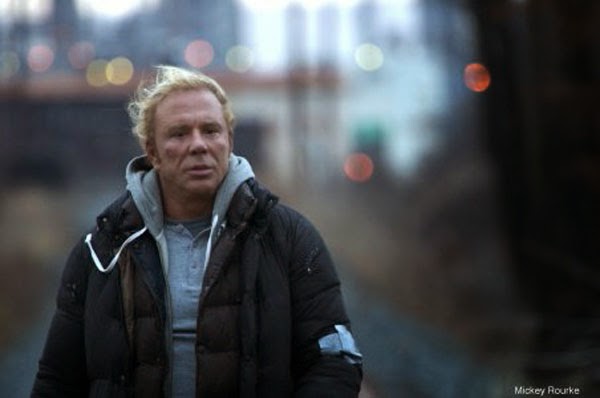 I've been a fan of Aronofsky's since "Pi," but this is my hands-down favorite of his movies.  Mickey Rourke stars as an aging professional wrestler, and Marisa Tomei is his would-be love interest.  Rourke's performance in this movie is stunning, and he really ought to have won the Academy Award for it.  I've seen this movie more times than I can remember.

Scorsese has been directing feature films since 1967, and many of these have gone on to win multiple Academy Awards.  "The Departed" is one of his more recent films, and certainly one of his best.  The Boston city police square off against organized crime.  It's a move full of memorable lines and excellent performances.

Clint Eastwood has done a lot with Westerns over the years.  In Unforgiven he stars as an aging outlaw out for one last score, and the buildup to his confrontation with Gene Hackman is a masterpiece of pacing.   I'd be hard put to say which is better - this film or "Pale Rider" - but both are great films.

I can't say that I've loved every movie that Oliver Stone directed.  "JFK" was trying too hard to make a point.  "Heaven and Earth" was terrible.  "Natural Born Killers" was too hyperactive.  But in "The Doors" Stone managed to tone himself down just enough to make a great movie.  And who would have thought that Val Kilmer would make such an excellent Jim Morrison?

This movie is not nearly as famous as others on this list, but I've loved it for years.  Harvey Keitel always had the potential for super-stardom, and this film is proof of that.  Abel Ferrara is on firm footing with regard to the subject matter, and Keitel is a revelation as a corrupt police officer.  None other than Werner Herzog directed a later version of this film with Nicholas Cage. 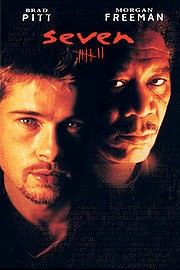 When one looks at recent trends in horror movies, many of these trends can be traced back to "Se7en."  It's bloody, it's atmospheric, and you know from the first act that it's not going to have a happy ending.  Kevin Spacey isn't in this movie for very long, but his brief appearance knocked him up several notches in the Hollywood hierarchy.

If you ever find yourself wondering why Billy Bob Thornton is in so many movies, you should see "Sling Blade."  This is the movie that made his career.  Thornton stars as a released mental patient who becomes friends with a young boy.  Thornton and the young boy would also star opposite one another in "Friday Night Lights" an excellent movie about high school football.

This is still the only movie that captures the spirit of James Ellroy's prose.  It's set in L.A., and the action centers around a corrupt police force.  Guy Pearce and Russell Crowe can both thank this movie for kickstarting their careers, and Kim Basinger is also mesmerizing as the woman caught between them.  I only wish "The Black Dahlia" had been this good.

A lot of people seem to have missed this movie when it appeared in theaters, but it has built up quite a following since.  Robert Duvall stars as a preacher who might also be a murderer, hiding in the country and spreading the Good Word.  Like "The Wrestler," I have seen this movie more times than I can remember.

Great movie about the American War on Drugs.  Michael Douglas makes an unusual attempt to understand the problem, while at the same time coping with his daughter's substance abuse.  It's an expansive film, and shows the issue from many surprising angles.  If you like this one, "Syriana" and "The Insider" are also very good. 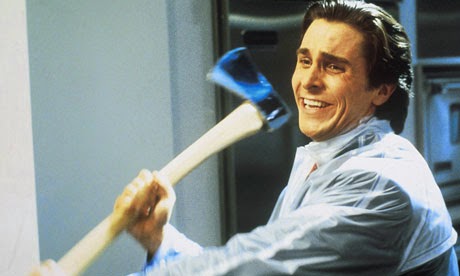 The novel that spawned this movie is one of my favorite books.  Before anyone really knew who Christian Bale was, he starred as a self-absorbed psychopath in "American Psycho."  Along with "Se7en" and "Monster" this is one of the best movies about a serial killer ever.  And if you liked this movie, I highly recommend the book.

Charlize Theron stars as real-life serial killer Aileen Wuornos.  Theron would win the Academy Award for her performance in this film, and I think the Oscar was well deserved.  Christina Ricci, who has also been excellent in other films, costars as her lesbian lover.  Where "American Psycho" is cartoonish, this one is heartbreaking.

If you haven't seen Sacha Baron Cohen in the "Ali G." show you should really check it out on YouTube.  His "mock-interview" style kicked into high gear with "Borat," and this film was a surprise hit for the actor-comedian.  "Bruno," the sequel to this film, is also very funny.  It's only too bad that the Freddy Mercury biopic stalled.  Cohen would have been great in that role.

Probably my favorite Coen Brothers movie, this one was adapted from a novel by Cormac McCarthy.  Tommy Lee Jones stars as a small town lawman trying to track a killer, and Javier Bardem almost steals the show as an assassin in the employ of a drug cartel.  Woody Harrelson, an actor who should probably have won some kind of award by now, is also terrific as the bounty hunter. 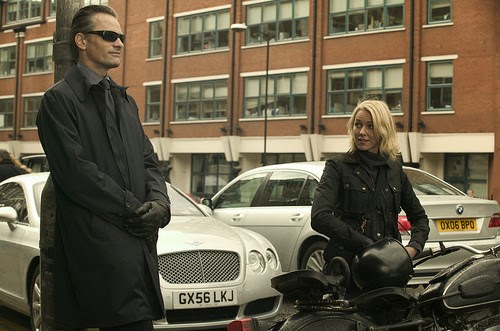 A movie about the Russian mafia in the U.K.  One of my favorite actors, Vincent Cassell, has a great part in this movie.  This movie still hasn't gained the attention it deserves, but perhaps in the next few years it will build up more of a following.  If you liked this one, Cronenberg's "A Dangerous Method" is also very good.

The only documentary here, about a Canadian heavy metal band that has seen better days.  Revisiting the rock stars of 20 years ago is usually a depressing exercise, and catching up with Anvil is no exception.  The movie does, however, sound a hopeful note at the end.  Anyone who loves "This is Spinal Tap" will find a lot to like in this movie.

Like Aronofsky's "The Wrestler," this one explores the intersection of sport and art.  Natalie Portman stars as a ballerina intent on playing the iconic role in Swan Lake, and Vincent Cassell appears as her mentor.  It's not just a movie about ballet, but also a movie about the pressure inherent in high-level performance.

Along with "Audition," this might just be one of the most disturbing horror movies ever made.  A young girl escapes from sadistic kidnappers and grows up to exact revenge.  The film gets steadily stranger from that point on.  It's super violent but also has a lot to say.  Watch it at your peril, and don't say I didn't warn you!

This film is something of a black sheep here, for the reason that although I loved the movie, I didn't love the ending.  Up until that ending, however, this is a great film.  Bradley Cooper tries to adjust to everyday life after a spell in an institution, and Jennifer Lawrence is an aspiring dancer.

Meryl Streep should have won another Academy Award for this film.  It's set in Oklahoma, where three sisters return home after the disappearance of their father.  Every scene at the dinner table is unforgettable, and Julia Roberts turns in an inspired performance as the oldest of the three daughters. 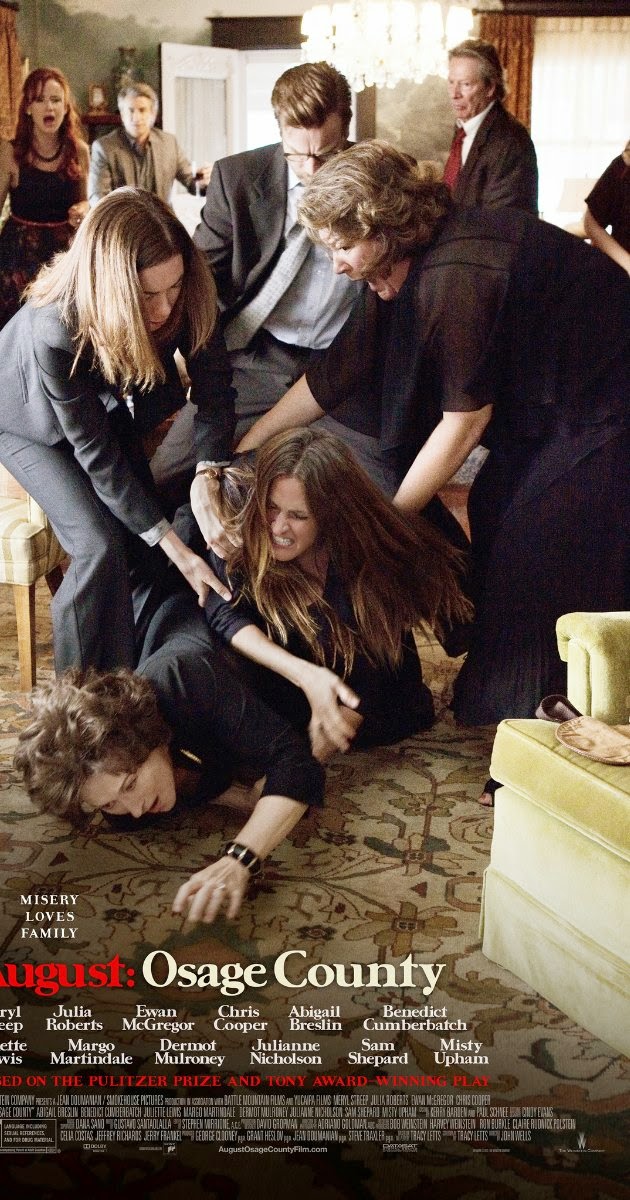