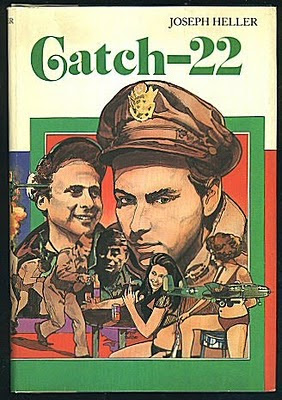 In many ways it reminded me of "Gravity's Rainbow," a much longer, much more cryptic book that explores similar subject matter. Unlike "Gravity's Rainbow," however, "Catch-22" is actually readable. Both books contain horrific accounts of casualties during World War II, both books glance upon the sexual exploits of soldiers during this period, but "Catch-22", in my opinion, narrates these facets of American military history much more effectively.

My only problem with this book is that there are just too many jokes, and too many digressions into the kind of Abbot and Costello, "Who's On First?" exchanges between the protagonist, Yossarian, and his fellow soldiers. Whereas one or two such exchanges would have been quite funny in a less jokey book, in "Catch-22" the sheer number of these dialogues tends to render the "bits" less funny.

This aside, I found the chapters near the end very entertaining. It is in these last chapters that the book truly shines, and the horror and absurdity of war have never been rendered with such exquisite irony.

I'll assign this book 8 stars out of 10. As said above, its a bit too jokey for me, but this book is excellent just the same.
張貼者： Times Three 於 上午8:47