Some Other Movies From 1981

In 1981 I was six, and don't remember much from that year.  I can remember seeing Superman II and Time Bandits (which freaked me out) in the theater, so I saw at least a few movies from 1981 when they came out.

The biggest movies of 1981 were Raiders of the Lost Ark, On Golden Pond, Superman II, Arthur and Stripes.  All of these are still good movies, and Raiders might just be the best action movie of the decade.  I get in arguments about this, but really, Die Hard?  Not nearly as good as Raiders.

Critical favorites that year were Chariots of Fire (see below), Reds (see below), On Golden Pond and Arthur.  Dudley Moore's popularity is probably hard for most modern moviegoers to understand, but in the late 70s and early 80s he was a very big deal.

Other good movies of 1981 were An American Werewolf in London, The Cannonball Run (goofy fun), Carbon Copy, Clash of the Titans (worshiped it as a kid), The Decline of Western Civilization, Dragonslayer, Escape from New York, The Evil Dead (classic), Excalibur, For Your Eyes Only, Gallipoli, Heavy Metal, Nice Dreams, Polyester (John Waters' last great movie), Scanners, Taps (historic) and Thief.

Worst movie of 1981?  Critics despised Mommie Dearest (see below), but for me that movie's like an old friend.  Yes it's terrible, but I'd watch Faye Dunaway in anything.  For me John Belushi's Continental Divide was a more grievous insult, in that it's an attempt to turn Belushi into a kind of latter-day Humphrey Bogart.  I'm really not sure what they were thinking there. 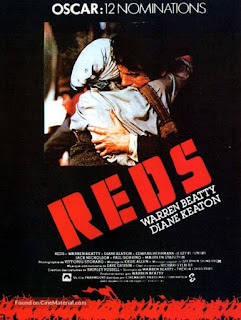 Warren Beatty, who also wrote and directed this movie, stars as a labor activist and communist sympathizer.  With Reds he was at the top of his game, and it's sad that Reds has faded from the public consciousness.  It's an impeccably constructed movie that focuses on an often misunderstood era in world history.

But the centerpiece of this movie is Diane Keaton.  Observing her character's moral gymnastics, one can only admire her unquestionable talent.  Like Beatty, she was also at the top of her game in 1981, and to me the fact that she's more closely identified with Woody Allen's most famous movie is a shame.

Beatty also won the Oscar for Best Director in 1981.  Reds was nominated for many other awards, but lost most of them to Chariots of Fire.  I think it should have won as many as the Academy was giving out.

Fun Fact #1: Beatty would do as many as 70 takes for some of the scenes in this movie.  Some of the cast members even began to question his sanity.

Fun Fact #2: Beatty and Keaton were dating up to that point, though their relationship deteriorated during the production of Reds.

Absorbing Hungarian film about an actor and ladies' man who collaborates with the Nazis.  Klaus Maria Brandauer might be less familiar to non-German speaking audiences, but his performance in this movie is captivating.  A sense of moral ambiguity is pervasive, and none of the characters escape compromise. 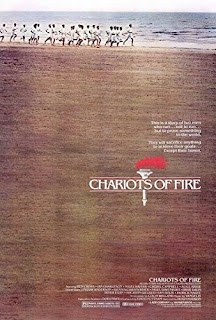 It's good and all but I fell asleep halfway through.  And let's be honest here, without the Vangelis soundtrack it would have only been half as good.  As it is it's the story of two sprinters, one a Jew trying to climb his way to the top of the British caste system, the other other a Scot who runs for the sake of his religion.  I wanted to like this movie a lot more, but it was hard to get excited about a movie whose climax is bound to be a foot race.

Call me perverse, but while watching the opening sequence the first thought that popped into my head was "The Big Feast."  The Big Feast (La Grande Bouffe) is an obscure Italian movie about a group of friends who retire to a cottage in the countryside to eat and fuck themselves to death.

The Four Seasons is, of course, a horse of a different color, with Alan Alda and Carol Burnett leading a cast of lesser-knowns as they go on vacation together.  And no, no one eats or fucks themselves to death.

Alda also directed this one, and it's full of the kind of emotional self-exploration you'd expect given his filmography.  The people in this movie, in my opinion, all over-analyze their personal relationships.  They don't do so in the completely destructive, Scenes from a Marriage way mind you, but in a way that's definitely not healthy.  I guess it's just the human condition, and The Four Seasons does a good job of portraying this condition in all its frailty.

Excellent movie by Brian De Palma.  In some ways it resembles a latter-day version of The Conversation (and an earlier Italian movie I haven't yet seen), but it's still very much De Palma's creation, with his fingerprints evident throughout.  John Travolta stars as a sound engineer who accidentally records an assassination, with Nancy Allen as a young woman caught in a plot to cover this assassination up.

If you ask me, Travolta is sometimes his own worst enemy when it comes to his career.  He'll appear in something excellent like Blow Out or Primary Colors, and then go on to star in movies like Battlefield Earth and, more recently, Gotti.  When he chooses a film wisely he's one of the best, but when he picks a turd, well... he really knows how to pick a turd.

A surprisingly well-directed, well-acted, well-written movie.  I particularly liked the sound design, which is way better than it had any right to be.  This film, moreover, is the one that really set the tone for the series - even if the signature hockey mask is nowhere in evidence.  The first movie is undoubtedly historic, but this is the one all the sequels tried so hard to emulate.

Fun Fact: The original plan for this series was to have an anthology in which an original story based on a more generic "Friday the 13th" theme would be released every year.  As it happened Jason Voorhees really clicked with audiences, and this plan was quickly abandoned.

It's... OK.  Sean Connery stars as a sheriff assigned to one of Jupiter's moons.  It lumbers on in unremarkable fashion, leading to an ending that will surprise no one.  My question is, why set this movie in space at all?  Aside from a few exploding heads, what does the setting add to the movie?

Kind of like The Brave One minus Jodie Foster, or Death Wish minus Charles Bronson, OR I Spit On Your Grave minus the rednecks.  In this one a young woman takes her revenge on several men after a brutal rape.  It was directed by Abel Ferrara, who would go on to direct the excellent King of New York, Bad Lieutenant and Body Snatchers in the early 90s. 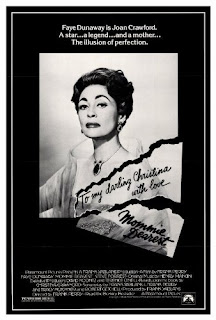 Poor Joan Crawford.  Not only does she have to deal with getting older, losing her star status and losing her man, but she also has to deal with THESE DISOBEDIENT CHILDREN.  Oh how she tries and tries, but they never learn.  Lock them in the shed, Joan!  That'll teach them!  Throw away their toys!

Critics were not loving this in 1981.  But I think at least some of them might have been missing the point.  The point being that no one really knew when Joan Crawford was acting.  One of the characters in this movie even says as much.  In a way it's easy to deride the movie as melodrama, and scorn Faye Dunaway's performance, but you have to factor in the kind of movies Crawford starred in, and the erratic nature of her personality.  Mommie Dearest might seem cheesy, but it might have more depth than people give it credit for.  Not only this, but there's an added dimension to this movie post-Weinstein scandal.

Fun Fact: The tell-all that inspired this movie, written by the "abused" daughter, may have been a complete fabrication, written with the intent of gaining access to Joan Crawford's fortune. 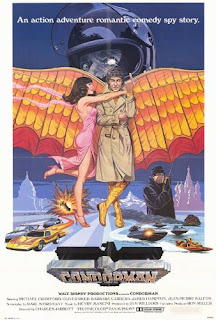 The slapstick superhero spy movie that nobody wanted, and even fewer people went to see.  In a way it feels like it belongs in the late 70s, premiering in the presence of TV shows like Wonder Woman and Shazam.  In another way it seems as if it was trying to capitalize on the success of the Superman films, albeit with a superhero that no one was ever going to find interesting.  It would qualify for "so bad it's good" status if it wasn't so talky.

Fun Fact: This was a Disney movie, and there have been attempts to incorporate Condorman into the MCU.

Fun Fact #1: Steve Martin has referred to people who don't like this movie as "ignorant scum."  He might have been joking.  Maybe he wasn't.

Fun Fact #2: Fred Astaire, who knew a thing or two about this type of film, despised it.

Featuring Linda Blair!  In this one a fraternity/sorority initiation goes wrong.  There's a lot of screaming and everyone in it is too dumb for words.

4. My Dinner with Andre

Bored the shit out of me.  Two artsy New York types discuss the theater and other topics over dinner.  I realize this movie has quite a following, but it was doing nothing for me.  I like some of director Louis Malle's other films - especially Atlantic City - but I couldn't bear this one.

Omen III not pretentious enough for you?  I give you Possession, a European horror film that's also a metaphor for sexual jealousy!  Sam Neill and Isabelle Adjani soldier their way through some truly awkward dialogue, all for the sake of a movie that was never going to make anyone happy.  Just go see Antichrist if you've got the stomach for it.  That movie's way better than this one. 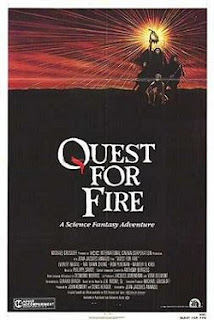 "What the Hell are You Watching?"

Cave people kill each other, fuck each other, and spend inordinate amounts of time trying to steal fire from each other.  I wanted to take this movie more seriously, but once the Evil Monkeypeople show up it infringes upon B movie territory.  The director, Jean-Jacques Annaud, has a good track record - and critics loved it at the time - but given our current understanding of human evolution it rings false.

Fun Fact #1: Rae Dawn Chong is in this.  She spends almost the entire film nude.

Fun Fact #3: Rae Dawn Chong was the person who "discovered" actor Chris Pratt waiting tables in Hawaii.  She cast him in the movie she was directing, and the rest is history.

Fun Fact #5: Ron Perlman is also in this.  It was his first movie, and the beginning of a long tenure in the makeup chair.

Fun Fact #6: Anthony Burgess, author of A Clockwork Orange, helped develop some of the cavemen's language for this movie. 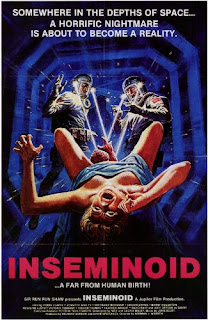 Fun Fact: You'll find a lengthy, shockingly academic review of this movie on its Wikipedia page.  Does it deserve that level of analysis?  I think not!