"The 39 Steps" by James Buchan 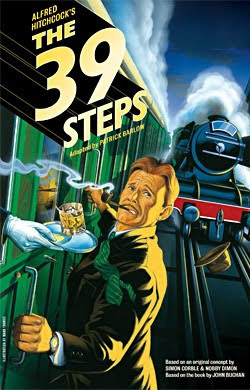 I had no idea this was also a book. I've seen Hitchcock's film version several times, and I'd heard of the other film adaptations, but I didn't know this was a book until I discovered a copy in the local bookstore.

The author described this work as being "a shocker," in the vein of other popular novels of his day. He turned to writing relatively late in life, and served the British government in various capacities up until his death. His book also brings to mind Conrad's "The Secret Agent," and H. Rider Haggard's novels. Since both authors are mentioned in this novel, it seems likely that Conrad and Haggard would have also been familiar with this book.

I have never been a big fan of the mystery/suspense genre, primarily because the plots seem so contrived. Arthur Conan Doyle, for example, bores the life out of me, and contemporary suspense writers only seem a little less boring by comparison.

Nevertheless, this is a novel worth reading. At just 103 pages, it's very short, and the plot clips along at a good pace. Even if the protagonist brings to mind the more interesting Allan Quatermain, it is a good read nonetheless. The story revolves around German efforts to spy on England and France, and before you know it the narrator is caught up in an international conspiracy that threatens to shake Western civilization to its very foundations.

One thing I especially liked about this book is that it reveals the narrator's psychology more explicity than most other books in this genre try to do. For this reason, not all of the suspense of the novel is connected to external events, but rather to how the narrator may or may not be interpreting these events correctly.