"A Suitable Boy" by Vikram Seth 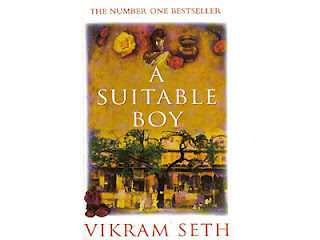 "'So do I, so do I,' he said, 'I've always felt that the performance of a raag resembles a novel - or at least the kind of novel I'm attempting to write.  You know,' he continued, extemporizing as he went along, 'first you take one note and explore it for a while, then another to discover its possibilities, then perhaps you get to the dominant, and pause for a bit, and it's only gradually that the phrases begin to form and the tabla joins in with the beat... and then the more brilliant improvisations and diversions begin, with the main theme returning from time to time, and finally it all speeds up, and the excitement increases to a climax.'"

At 1,474 pages, Vikram Seth's 1993 novel, "A Suitable Boy" is the longest novel (published in one volume) in the English language.  This book took me a while to finish.

I'm no expert on contemporary Indian fiction, English-language or otherwise.  I've read Rohinton Mistry's "A Fine Balance," Vikas Swarup's "Q&A" (a.k.a. "Slumdog Millionaire), and Rudyard Kipling - if he can even be counted as an Indian author.  Seth's novel is less depressing than Mistry's, and is less jokey than Swarup's.  Given Kipling's stature within the world of literature in general, and in the world of Indian English-language fiction in particular, I wouldn't know where to begin in comparing Seth and Kipling.

Summarizing the plot of "A Suitable Boy" is almost as challenging.  In the personal sense, it follows the search for "a suitable boy" as a prospective husband for one of the novel's many, many characters.  It is also the story of India, and the struggle of the Indian people to free themselves of the cultural trappings of England.  Spiritualism is another theme that runs through the book, as is the ethnic tension between Hindu and Muslim in the wake of Partition.

The book takes place in the 1950s, after the British have left and Gandhi has died.  Nehru is President, and Pakistan has just been severed from India.  The Indian government is attempting a large-scale land reform, and wants to seize the estates won by British sympathizers from the previous government.  Many Muslim residents of the novel's fictional centerpiece, the city of Brahmpur, have migrated to Pakistan, and many of Pakistan's Hindu inhabitants have returned to Brahmpur after losing their properties and livelihood in Pakistan.

Vikram Seth is a fantastic writer, but I've got to say that "A Suitable Boy" cries out for an editor.  While I'm aware that this novel may appeal to non-Western models of fiction, there are portions of this book that do little to advance the plot, and many of the characters could have been discussed in less detail.  The digressions into the doings of Kedarnath and Haresh, for example, detract from the flow of the narrative.  Much of the legal and political goings-on could have also been left out.

Which is not to say that "A Suitable Boy" isn't a great read.  It is.  But like another famously long book, namely, "War and Peace," you may find yourself longing for the abridged version.

Incidentally, the sequel to this book, "A Suitable Girl," should be released soon.
張貼者： Times Three 於 下午8:01 沒有留言: