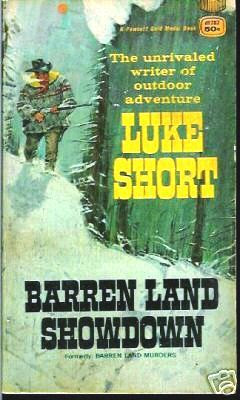 "Before daylight next morning they were headed up the Raft. It was a tough river, and the higher it went, the tougher it got. A half day's travel above Lobstick, where it was crowded between towering rough-faced walls so steep that the snow did not cling to them, there was a crack in the north face of the wall. Gaunt black ramparts broke away to reveal an opening, snow-floored, narrow, serene. This was the Wailing. Entering it, a man dived into a gloom that never saw the sun, himself and his dogs dwarfed by the ugly porphyry cliffs, and his spirit was awed."

I believe that Luke Short's books have all been out of print for several decades. I bought mine from a used bookstore in Seattle. I am also entirely ignorant of the Western as a genre within popular fiction, so I cannot say how Luke Short compares to others in that genre.

"Barren Land Showdown" follows the travails of Frank Nearing, a prospector in Canada's far north. He agrees to hide another man, Lute Westock, from the law, believing that Lute is involved in some kind of property dispute with his soon-to-be ex-wife. At the beginning of the book they stumble upon trappers using strychnine in their traps, which is illegal. One thing leads to another, and one of the trappers is murdered. Frank gets fingered for the crime, and is forced to prove his innocence.

I liked this book. It was written with the kind of precision that only the best pulp novels achieve, and the characters were so clearly drawn as to remind me of what most contemporary literature is missing. This is a book that demonstrates craftsmanship, of a kind that one doesn't often see nowadays.

I would be eager to read more of Luke Short's books. He might be out of print, but that doesn't mean he's not worth reading.