"The Little Friend" by Donna Tartt 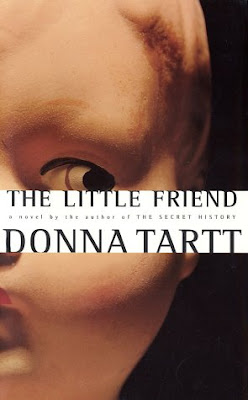 I don't think that Donna Tartt has ever smiled - not once - in her entire life.  Just take a look at the picture inside the dust jacket of this book.  She is standing there, unsmiling, daring you to be happy.

No, I can't believe that Donna Tartt has ever smiled.  And if she had, she wouldn't be writing books like "The Secret History" and "The Little Friend."  If she smiled, she'd be writing happier books.

A friend loaned me a copy of "The Secret History" two years ago.  I can't say that it was a great book - the characters were hard to empathize with, and the "maleness" of some characters was entirely unconvincing - but it was a good try, and that book led me to expect great things from Donna Tartt.

Yes, "The Secret History" was gloomy, and downright depressing - filled with pessimism from beginning to end - but there were some great ideas in it.  Given the originality of these ideas, I think that in time Donna Tartt will mature into a better writer, and one day she might just write one of those books that makes people see the world in a whole new way.

Still, as I read "The Little Friend," I couldn't help but reflect back on that Douglas Adams novel I just read, "So Long, and Thanks for All the Fish."  I couldn't locate the exact passage, but towards the end of that (much shorter) novel he points out that many American novels are full of pointless details, and much of the information supplied by (American) authors does little to advance the plot.

There is no better example of this than "The Little Friend," a book in which very little of importance seems to happen.  Donna Tartt spends hundreds of pages describing dead birds, or fruitless quests for local snakes, or, most boringly, the weather.  No character's interests are truly advanced or checked, no one really goes anywhere, and the entire book revolves around memories that have little dramatic significance.

It is like the antithesis of every novel that Faulkner ever wrote.  Instead of a series of microcosms that brilliantly illuminate the macrocosm, what one finds in "The Little Friend" is a world of isolation, where inner worlds are isolated from one another, and there is NO big picture - not in the author's mind, not in her characters' minds, not anywhere.  In the end it all amounts to a kind of clutter, not unlike the newspapers that litter the Cleve-Duffresne household.  Yes, there often isn't any "big picture" in life, but what else is an author supposed to do, if not draw larger meanings from seemingly disconnected events?

I'm not saying that this book is horribly bad, just that it's boring.  At 555 pages, it's waaaay too long.  A more discerning editor would have removed the first 200 or so pages in their entirety, and what we would have been left with, at 355 pages, would have been a much better novel.  Donna Tartt definitely has a way with words - I wouldn't dream of disputing that - but a skill with words doesn't automatically make for a compelling story.
張貼者： Times Three 於 上午8:29