"Against All Enemies" by Richard A. Clarke 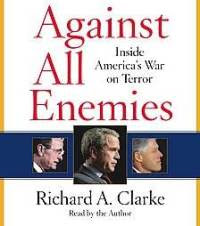 "After the shock of September 11, Americans rallied around the flag in support of their country and their government. Unfortunately, that commendable sentiment brought a blind loyalty, an unquestioning willingness to accept whatever the leadership said was necessary to fight terrorism. By suppressing our natural skepticism, turning off our analytical filters, we participated in a major national mistake, the invasion of Iraq."

I agree with the above statement. Whether or not you agree depends upon complex arguments which will not be cataloged here. Whether or not there were any WMDs, whether or not Bush Jr. was trying too hard to make a name for himself, and whether or not the War on Terror is/was a preventable mistake are all points open to debate, and none of these points will be decided anytime soon.

I will say that books like this have a definite shelf life. The "Washington insider" genre has always been popular, and new additions to this category of non-fiction are to be found each month. A few of them stand the test of time, but most of them fade from memory once the events they attempt to describe have been replaced by newer, more relevant issues. I assume that this will be one of those books that fades.

Reading this in 2011, I am left to wonder how much of the War on Terror is directly attributable to Bush Jr. and Co. As we have seen in recent months, many of America's previous blunders with regard to foreign policy have continued into the Obama administration, as our recent debacles in Libya, Iraq, and Afghanistan show.

I just wish that Americans (like me) could start learning from our history, in order to avoid repeating it. Reading a book like this is perhaps a step in that direction. It is a far-from-masterful survey of what led us into our present predicaments, but as an example of popular non-fiction it is not surprising that this book lacks the detail and fleshed-out arguments found elsewhere. It is a good introduction to the War on Terror, but far from the last word on this subject.
張貼者： Times Three 於 下午8:26