"Life, the Universe, and Everything" by Douglas Adams 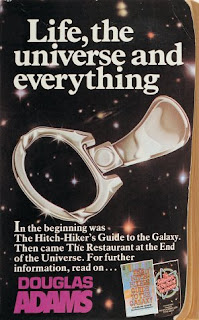 "It was a large mattress, and probably one of quite high quality.  Very few things actually get manufactured these days, because in an infinitely large Universe such as, for instance, the one in which we live, most things one could possibly imagine and a lot of things one would rather not, grow somewhere.  (A forest was discovered recently in which most of the trees grew ratchet screwdrivers as fruit.  The life cycle of ratchet screwdriver fruit is quite interesting.  Once picked it needs a dark dusty drawer in which it can lie undisturbed for years.  Then one night it suddenly hatches, discards its outer skin and crumbles into dust, and emerges as a totally unidentifiable little metal object with flanges at both ends and a sort of ridge and a sort of hole for a screw.  This, when found, will get thrown away.  No one knows what it is supposed to gain from this.  Nature, in her infinite wisdom, is presumably working on it.)"

"Life, the Universe and Everything" was first published in 1981, back when I was six years old and entirely unable to read it.  It is the third book in Adams' "Hitchhiker" series.

This book is my favorite in the series so far.  It's not as laugh-out-loud funny as the first book, and it doesn't feature any concept as cool as "the restaurant at the end of the Universe," but it is really, really clever.  It is also funny, but it's mostly just clever.  The plot of this book was much better thought-out than the first two books, and it's extremely well written, with an eye (and ear) for the English language that leaves most other authors in the dust.

I want to say that the plot is beside the point, but that's not true.  Rather, the plot is a lot more subtle than the book jacket would have you believe, and is just too "layered" to be neatly outlined here.  Suffice to say, there is an alien race about to obliterate the entire universe, Arthur Dent and Co. are left to stop them, and along the way they learn of cricket's sinister origins, the cruel side of reincarnation, and the dangers inherent in challenging thunder gods to a brawl.

以電子郵件傳送這篇文章BlogThis!分享至 Twitter分享至 Facebook分享到 Pinterest
標籤： douglas adams, hitchhiker's guide to the galaxy, life, restaurant at the end of the universe, the universe and everything
位置： Taiwan