"The Redemption of Althalus" by David and Leah Eddings 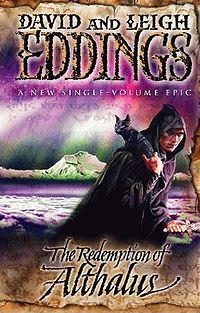 Both of the people who wrote this book are deceased. David Eddings was from Spokane, Washington, and he and his wife both ended their days living in Carson City, Nevada. It is worth noting that somewhere between Spokane and Carson City Mr. Eddings accidentally burned all of his old manuscripts - and the garage of his house - after he unwisely tested the flammability of a pool within said garage by using a lighted match.

I'd like to thank him for that, wherever he is. This has surely limited the number of "lost" manuscripts that are bound to resurface in the wake of his passing.

The Redemption of Althalus is one of the worst books I have ever read. The plot makes no sense. The characters are irritating. Nothing about the books encourages a suspension of disbelief or any kind of emotional response. To make things even worse, the book is really, really long.

It might be considered disrespectful on my part to criticize the work of two dead people. I, for my part, consider their ever having written this book to be an act of disrespect. The more I read about Mr. and Mrs. Eddings, the more apparent it became that they only wrote fantasy books for the money. This, combined with the overwhelmingly derivative nature of this book makes for some excruciating reading.

I would give this book 1 star out of 10. It only gets that single star because it wasn't longer. For that, at least, I thank Mr. and Mrs. Eddings.
張貼者： Times Three 於 上午8:43