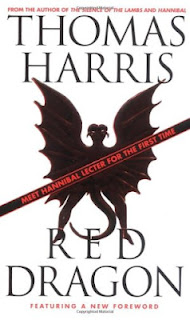 Red Dragon is Thomas Harris' second book, and the first to feature Hannibal Lecter.  He wrote this book waaaaay back in 1979, when I was only four years old.

I am not an "avid fan" of the mystery/suspense genre, so I don't have a lot of other books to compare Red Dragon to.  Like anyone else who's over 30, and hasn't been living under a rock, I've seen the movie version of Silence of the Lambs, and also the inevitable sequels.  I don't know who you can really credit with making Hannibal Lecter famous - Thomas Harris, Anthony Hopkins, or Jonathan Demme.  The answer, I suspect, is all three.

Red Dragon (in case you haven't already seen the movie) outlines forensic genius Will Graham's attempts to catch a serial killer.  He spends a lot of time investigating crime scenes, and displaying near-telepathic powers of observation.  In the end... well, you've probably already guessed what happens.

It's fine as book-of-the-month-club type books go.  It is quite interesting in the beginning, but the suspense wanes after the killer is revealed early on.  I think it would have been much better if the killer's identity had remained a secret until the very end, or if Will Graham was more believable as an actual, living, breathing human being.  If Harris had given him a bit more dimension, and focused more on Graham treading the thin line between sanity and insanity, this would have been a much better, much more nuanced kind of book.  As it is, one never believes that Harris is actually going to kill of his main character, and so this book lacks any sense of danger.

It is amusing to compare this novel to another, entirely different novel I just read: Graham Green's Journey Without Maps.  Journey Without Maps isn't even half the length of Red Dragon, and yet I found that the former book took me twice as long to read.  There is a weight to Greene's words that Harris doesn't even attempt, and where Harris uses sentences like toilet paper, Greene takes his time, and says only what he truly intends to say.

This isn't to say that Red Dragon is a bad book.  Thomas Harris obviously did his homework, and this novel is rich in forensic and psychological detail.  It is, however, a somewhat shallow book, and can only be considered light reading.  It's better than anything Dan Brown has ever written, but that's not saying much.
張貼者： Times Three 於 下午8:19