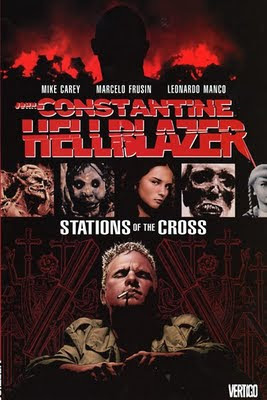 I am surprised that this character is still around. I read the first Hellblazers when they appeared in the late 1980s, and I never thought this character would be so long-lived.
This TPB, "Stations of the Cross," is standard horror comic stuff. Constantine loses his memory, and spends most of this graphic novel fleeing from various demons. A lot of profanity is employed, people get murdered in creative ways, and the reality of his situation is ultimately unveiled in all its horror.
I've never been a huge Hellblazer fan, and this TPB hasn't changed my mind. It's all very dark, but fails to be scary.
張貼者： Times Three 於 上午6:12