Some Other Movies From 2016

La La Land was hands-down the critical favorite that year.  I tried to get through this movie and couldn't.  If you like it, fine.  I just can't stand musicals.

In my opinion the Oscars of that year exhibited a serious disconnect between the Academy and the movie-going public.  Moonlight was a good film, but I don't think it deserved to win Best Picture.  Damien Chazelle is a good director (he also did Whiplash), but I don't think he deserved Best Director.  Casey Affleck for Best Actor (Manchester by the Sea) was a solid choice, as was Viola Davis for Best Supporting Actress (Fences), but I didn't get Emma Stone for Best Actress (La La Land again) and the way both Lion and Nocturnal Animals were ignored was a mystery to me.

The fact that the Academy has proposed a new Best Popular Film category only adds fuel to this fire.  Don't all films aspire to some kind of popularity?  Don't all films strive to find an audience?

My favorite films from that year were the above-mentioned Lion and Manchester by the Sea, and also Demolition, Batman v. Superman: Dawn of Justice (I know, I know...), Captain Fantastic, Hell or High Water, and The Founder.  I want to list Nocturnal Animals here too, but that movie's really hard to watch a second time and I think "re-watchability" is one of the things that separates good movies from great movies. 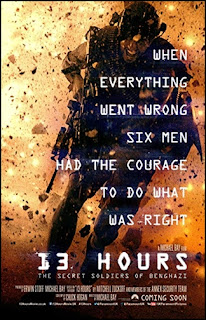 1. 13 Hours: The Secret Soldiers of Benghazi

Don't let Michael Bay's involvement put you off too much, he does occasionally direct a good (if overblown) movie.  13 Hours is based on a real incident involving US military and intelligence personnel assaulted in Libya, and it's appropriately violent (if nothing else).  It has a 50% audience score on Rotten Tomatoes, which I think is a fair assessment of its quality.

Bank robbers at the mercy of the Russian mafia.  The script is great, the cast is great, and Woody Harrelson steals every scene he's in.  This movie's RT score was just a little higher than 13 Hours, and it does bear some similarities to Michael Mann's Heat, but I thought it was an excellent heist movie.

"Wormhole to the dark web," huh?  Are all of the U.S. national defense agencies really hooked up to the Internet?  I hope not.  Because you know that if they are, the Russians have already hacked that shit a hundred times over.

And why no surveillance and the dead guy's wife's house?  Why not tap his phone?  Why not at least ask her to report if she seen him again?

When you think about it, this movie's like the inverse of Reynold's Self/Less, in which a richer older man has his memories implanted into a younger man's body.

Interesting documentary on the Stuxnet computer virus and where it probably originated.  Those watching this documentary might also want to look at the U.S. Cyber Command and Iran's nuclear program.  The movie Snowden also amplifies on some of the concerns and "defensive" applications mentioned in this documentary.  Oh, and Iran's nuclear program ONLY ACCELERATED after they discovered that infiltration had occurred.

Maybe we should all take another look at Starship Troopers and Showgirls.  Maybe there was something there we missed.  Maybe Paul Verhoeven was more subtle than we previously imagined?

Whatever the case, Verhoeven did a first-rate job directing Elle, the first of his movies I've seen in quite some time.  This French-language production centers around a woman coming to terms with her past and attempting to reconcile her various relationships.  It's on the slow side, but definitely worth watching.

Fun Fact #1: Isabelle Huppert made her American film debut way back in 1981, with the critically and commercially disastrous Heaven's Gate.

Fun Fact #2: This was originally going to be a Hollywood production, but Verhoeven found himself at odds with the "morality" put forth in mainstream Hollywood pictures.  He originally considered Jennifer Jason Leigh for the role, but ultimately decided that his vision would be better realized in France.

I can't help but think that Anya Taylor-Joy has a long, storied career in movies ahead of her.  Her face consumes whatever frame she happens to be in, and she has enough acting ability to carry her through any movie.

In The Witch she plays a member of a Puritan family confronting evil in the wilds of New England.  It's a well-directed movie that manages to build up a mood without growing derivative.

7. The Free State of Jones

About half this movie's good, and the other half is an unqualified mess.  It starts out as the story of poor whites banding together against the predations of the Confederate army, but overreaches itself by attempting to address the larger issue of race relations in the South.  The subplot involving Jones' son is particularly confusing, and to some extent lessens the impact the earlier parts of the film might have had.

Colin Firth, Jude Law, and Nicole Kidman star in this movie about the relationship between Thomas Wolfe and his first editor.  It's a solid effort, but two things bothered me, these being: 1) the scene between Kidman and the editor's wife, which was a little too on the nose, and 2) the symbolic usage of Firth's hat, which seemed heavy-handed.

A young woman makes enemies in the Los Angeles modelling industry.  The minute I saw director Nicolas Winding Refn's (Drive, Only God Forgives) name in the opening credits I knew I'd like this film.  It requires patience, but if you have the time it's very rewarding.  In some respects it reminded me of David Cronenberg's Maps to the Stars, but this is a much purer, more streamlined film without the forced Greek tragedy.

Fun Fact #1: One of Refn's biggest inspirations was the original Texas Chainsaw Massacre, which he first viewed as a young boy.

Fun Fact #2: This movie was in part inspired by the life of Elizabeth Bathory.

Blake Lively, forevermore denied the role of Star Sapphire in any Green Lantern sequels, stars as a woman who gets stuck on a reef by a killer shark.  I wouldn't describe it as "classic," but it's more suspenseful than most other horror/suspense movies released in the past few years.

Two men try to outwit one another after a girl witnesses a murder.  Thomas Jane (remember him?) and Laurence Fishburne star.  No big surprises here, but it's professionally done and relatively plausible. 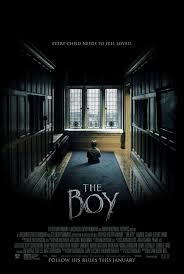 An American woman travels to the U.K., where she works as a nanny to a doll.  Pro: This movie is spooky from the very beginning to the very end.  Con: The fact that the woman doesn't go running for the hills in the first ten minutes costs her some major sympathy points.  Said protagonist also goes from 0 to Crazy in the time it takes her shoes to mysteriously appear outside her door.

Unfunny comedy about two guys trying to get their cat back.  Key and Peele star.  There's a kinda, sorta funny bit where Key tries to get some gangsters into George Michael, but aside from that this movie's laugh-free.  Don't be fooled by its high scores on various websites.  These scores only account for those who bothered to see the movie.

A woman travels to Japan's "suicide forest" in search of her twin sister.  I've never understood the fascination with this place, either as portrayed in this film or the earlier Sea of Trees.  And where Sea of Trees is at least somewhat interesting, The Forest is both predictable and chock full of horror movie cliches.

Alien invasion!  That's a thing, right?  Or is it?  I guess it depends on which YouTube conspiracy theorist you believe.

Chloe Grace Moretz stars as a girl trying to rescue her brother.  This film has Young Adult written all over it, so I won't bother to criticize the plot too much.  Needless to say, the aliens' plan to conquer and/or exterminate mankind makes almost no sense. 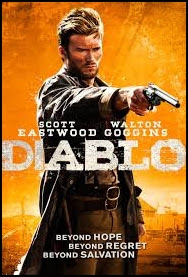 One So Bad It's Almost Good

Western in which Scott, the junior Eastwood, attempts to rescue his "wife" from Mexican bandits.  In between here and there he spends a lot of time messing with his saddle and grimacing at the camera.  A lot of people blame Eastwood Jr. for this hot mess of a film, but in my opinion the blame rests solely with the director, who's no Sergio Leone.