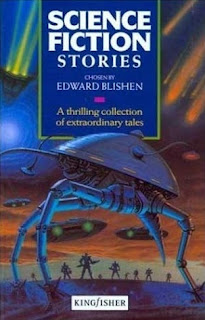 "'Not any more.  You came to Earth millions of years too soon.  While you were hiding in the ground waiting for intelligent life to develop here, it was dying back on your own world.'"

Science Fiction Stories is a collection of stories and excerpts aimed at children.  Very few of the stories involve actual scientific concepts, and both aliens and alien worlds feature in many of the stories.

Most of the stories in this collection aren't very good, and the excerpts are, in their way, even more frustrating because their inclusion alludes to larger, better works that weren't reprinted in their entirety.

The stories/excerpts in this collection are:

1. The Boy, the Dog and the Spaceship

A tiny alien arrives on Earth planning to work its way up the food chain via mind control.  Not very memorable.

An excerpt from H.G. Wells' The Invisible Man.  It's good, but this excerpt is also the best part of the book.  After you'd read this, what would be the point of reading the novel?

Ursula K. Le Guin.  I've never been a fan.  In this excerpt from The Wizard of Earthsea a young mage battles a family of dragons.  Is this really science fiction?

Far and away the worst story in this collection.  A young boy "raises" a star in a homemade antigravity chamber.  The "science" in this story makes absolutely no sense, and the end is weirdly depressing.

An excerpt from The Master, a book I'd never heard of.  A couple kids make a discovery on a remote island.  Science fiction?

A boy is abducted by an alien in the English countryside.  It's not half bad until the last few pages.  Then - why would the boy make that kind of assumption?  What are the odds of his being correct?

Reminded me a little of A Canticle for Leibowitz, though of course this amateurish story is a far cry from that seminal work of science fiction.  In a post-apocalyptic future a boy comes to terms with his genetic heritage.  I failed to understand why the treasure wasn't worth having, or how this caused the boy to reassess his earlier prejudice against the "polymufs."

An excerpt from Jules Verne's From Earth to the Moon.  I love that book.  It's one of the weirdest, most strangely depressing things that Verne ever wrote.

9. Goodbye to the Moon

A moon-born child accompanies his father on a trip back to Earth.  It goes nowhere fast.

One of Arthur C. Clarke's contributions to this collection.  It's little more than an explanation of orbital mechanics.

Short story by Isaac Asimov.  Like "The Shot from the Moon" above, this isn't so much a story as an outline.  Two siblings discuss educational trends in the future.

12. A Fight Between Lizards at the Centre of the Earth

Excerpt from Journey to the Center of the Earth.  Those interested would be better served by either the novel itself or the Rick Wakeman album.

Is "Bobo's Star" really the worst story in this collection?  Or is it "The Last Man Alive?"  Now that I think about it, I'm really not sure.  For some inexplicable reason a deadly gas kills most of the people on Earth (except for a guy at the north pole), and this last surviving human takes a series of trains to... somewhere, to do... something.  Apparently the author had a fondness for trains, and this story was his excuse to talk about that.

14. How We Were Tracked by a Tripod

Kid-friendly story about three boys pursued by an alien.  It could be seen as a continuation of Wells' War of the Worlds.  For travelers from another planet (galaxy?), the aliens' technology sure seems impractical.

H.G. Wells' most famous book.  Even this little sliver of it is much better than almost everything else in this collection.

Humans debate whether or not to return to Earth after living on a typhoon-ravaged planet.  For a better (although far from perfect) treatment of a similar topic, I recommend Arthur C. Clarke's Songs of Distant Earth.

Ray Bradbury.  What can one say about Ray Bradbury?  On the one hand he was a good, if not great, writer.  On the other hand he seemed stuck in a genre he had little real interest in or appreciation for.  He was happy to jump up and say, "Me!  I'm one of the great American science fiction writers!" but one always got the feeling that he could've cared less about what his contemporaries were doing.

"All Summer in a Day" is one of his "tropical Venus" stories, and it would have flown in the face of any scientific understanding of Venus even back in the 50s.  I like The Illustrated Man, I enjoyed The Martian Chronicles, but I'm not a fan of his Venus stories.

Two explorers unwittingly discover alien life.  The ending of this story is somewhat perplexing, and not in a good way.

"The Fear Shouter."  Pretty good name for a band.  In this story a young man tries to survive on an alien world.  It's one of the better stories in this collection.  Apparently author Jay Williams had a brief career in American science fiction magazines.

Undoubtedly the best story here, and also by Arthur C. Clarke.  In "The Wind from the Sun" Clarke combines his love of space travel with his love of sailing, and even though the ending isn't great it still easily outshines all of the above stories.