"The Graveyard Book" by Neil Gaiman 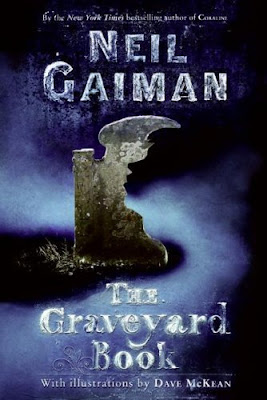 I’ve never really understood why Neil Gaiman is so popular. I tried reading American Gods a while back, but gave up after the first chapter. It just seemed too much like a comic book without the cool art, full of characters with ridiculous names in implausible situations. Yes, the Sandman comics he wrote were great, but those are as interesting for the illustrations as for the writing.

Neil Gaiman has always struck me as a latter-day Clive Barker, and I’m sure he is aware of how similar many of his achievements are to those of his predecessor. Both authors have dabbled in comic books, both are drawn to darker themes, both have written books for younger audiences, and both happen to be British. I think I will always like Clive Barker more, primarily because his Books of Blood were some of the most imaginative horror stories to come along since H.P. Lovecraft.

I’m not, however, trying to say that Neil Gaiman’s books are bad, or that Neil Gaiman is a bad writer. I just think he is over-hyped. When you look at what he has actually produced: Sandman, American Gods, Coraline, and The Graveyard Book, it is hard to reconcile his reputation as a premier fantasy writer with his output to date. For that matter, one could have said the same about Clive Barker at the height of his popularity, as the Hellraiser movies were in their ascendancy. Again, there are many parallels between the two authors, not least of all their status as “the next big thing.”

The Graveyard Book is about a boy saved from a killer by a community of ghosts. It’s an easy read, and could probably be disposed of in an afternoon. New fans of Neil Gaiman will have already read it. Older fans have undoubtedly read and reread it. Fans of Stephen King will probably find it “visionary,” and fans of Clive Barker will be reminded of his Cabal.

If you ask me, I think you ought to go read some H.P. Lovecraft instead. This is presuming you haven’t already. I’ll give The Graveyard Book six stars out of ten. It has some cool illustrations, and as said above, it’s an easy read.