Some Other Movies From 1983

In 1983 I turned eight.  I wonder if I would've liked the adult version of me, the one living in Taiwan now.  Maybe I would've been disappointed.  I hope not.

The biggest movies of 1983 were Return of the Jedi, Terms of Endearment, Flashdance, Trading Places and WarGames.  Of these movies WarGames remains my favorite, and not just because part of it's set in Seattle.  Octopussy, Mr. Mom and Risky Business were also hits that year, and I've seen those three movies more times than I can remember.

Other good movies of 1983 were Christine, The Dead Zone, The Keep, Krull, Monty Python's The Meaning of Life, National Lampoon's Vacation, Never Cry Wolf, Never Say Never Again, Scarface, Star 80, Strange Brew, Superman III, Twilight Zone: The Movie and Videodrome.  To be sure, some of these qualify for "so bad it's good" status, but I was 8 at the time and didn't know any better.

The worst film of 1983?  The Golden Raspberry Awards would single out The Lonely Lady, which I have vague memories of watching on cable when I was little.  I'm not sure what movie I would pick, but I did see Liquid Sky not long ago and thought it was terrible. 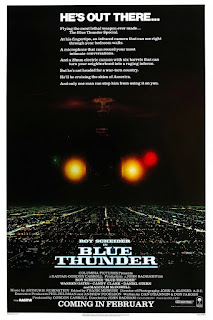 Seven things everyone needs to know about this movie:

a. Roy Scheider is awesome.  In his day he made so many average movies better.  Forget about Jaws, because that was all Spielberg.  I'm talking about movies like Jaws 2, 2010, and - to a lesser extent - this one.  If he hadn't been in Blue Thunder it would've only been half as good.

c. Damn sexy, but that peeping Tom thing they do in the helicopter just wouldn't (if you'll excuse the pun) fly now.  They would be SO fired, so fast.

d. Malcolm McDowell, another actor who chews scenery like a m*&herfucker, is also in this.  Seeing him and Scheider trade insults is great.

e. This movie overtook Flashdance (see below) at the box office.  It's really hard not to view that development in sexual terms.  I'm even tempted to say "conquered" or "sexually dominated" in a cinematic context.

f. This movie followed Clint Eastwood's Firefox, another hit film featuring a unique piece of military hardware.  Blue Thunder is, however, much better than Firefox. 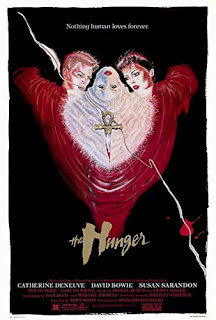 Not a big fan of the vampire genre, but this is probably the best vampire movie I've ever seen.  Tony Scott (brother of Ridley) directed this three years before Top Gun, and his frenetic style was well-suited to the story.  David Bowie, Catherine Deneuve (!) and Susan Sarandon starred.  Like Flashdance (see below) it's at times more music video than movie, and I half-expected Bowie to start singing "Let's Dance" during the opening credits.

Fun Fact #1: The last scene of this movie was added at the studios' insistence.  They were hoping for a hit, and Scott's original ending precluded the possibility of sequels. 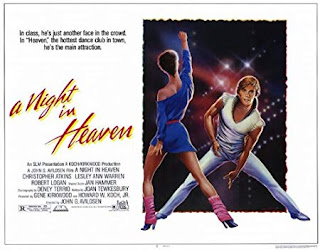 1. A Night in Heaven

Christopher Atkins (the guy from The Blue Lagoon) stars as a male stripper, with Lesley Ann Warren as a college professor in a troubled marriage.  Critics were not fond of this one, but I thought it was alright.  Sure, it meanders a bit, but it's not THAT bad.  It was directed by John G. Avildsen, the guy who did the first Rocky and the underrated Save the Tiger.

Fun Fact: Andy Garcia is in this movie.  It was his third.

German movie about a psychopath's weekend on the town after his release from prison.  It reminded me of a lot of movies: American Psycho, Henry: Portrait of a Serial Killer, and especially the 2012 Maniac remake.  The camerawork is experimental, and sometimes it works, sometimes it doesn't.

Nuclear holocaust comes to the Midwest.  The most famous people in it are probably Jason Robards, John Lithgow and Steve Guttenberg, who'd done Diner the year before, and who would do the first Police Academy the year after.  It was a made-for-TV production, but it's very well written and leads to a satisfying conclusion.

I think people nowadays forget what an omnipresent threat the Soviet Union's nuclear arsenal was in the early 80s.  I can definitely remember it keeping me awake at night.  I suppose that in 2019 many of us worry more about terrorists or the ascendant Chinese, but back then we were more worried about the Soviets spoiling our party.

Heavy Metal Thunder: At the 55 minute mark mute the movie and put on Slayer's "Raining Blood."  I think you'll like the results.

Part extended music video, part feminine version of Rocky, part movie without an appreciable plot, Flashdance definitely hasn't aged as well as some of the other films in this entry.  You can tell they were trying their damnedest to work every damn "hit" they possibly could into the soundtrack, and the result seems incredibly forced at times.

But oh God Jennifer Beals is beautiful in this movie.  "Radiant" is the word.  She carries this entire movie on that fact alone.

Fun Fact #1: Director Adrian Lyne would go on to direct 9 1/2 Weeks, Fatal Attraction, and Jacob's Ladder.  His years in the spotlight would end with 1993's Indecent Proposal, which was also reviewed here recently.

Fun Fact #2: Adrian Lyne was only offered the job of director after David Cronenberg (of all people) turned it down.  This was around the time he directed both Videodrome and The Dead Zone.

Fun Fact #3: Gene Simmons (of all people) was initially offered the role of Jennifer Beals' love interest.  Kevin Costner was also almost cast for the part.

Michael Caine stars as a world-weary professor tutoring a lower class student.  The synth soundtrack is a bit overbearing at times, but it's well acted and well thought-out.

Meryl Streep stars as Karen Silkwood, union activist and worker in a plant that produces nuclear fuel rods.  The first half is excellent, but the second half gets bogged down in Karen Silkwood's backstory.  I think it deserved the attention it got from the Academy that year, but in my opinion 1979's Norma Rae covered similar ground much better.

A young man confronts the return of his older, self-destructive brother.  This is probably the most experimental of Francis Ford Coppola's films, and like Coppola's The Outsiders it was adapted from a novel by S.E. Hinton.  The Matt Dillon-led cast includes Mickey Rourke, Nicolas Cage, Diane Lane, Dennis Hopper, Chris Penn and even Laurence Fishburne.  It's SLOW, but if you're in the right mood you'll like it.

Fun Fact: You might wonder what Nicolas Cage, at that time relatively unknown, was doing in a movie this big.  It may have helped his cause that he's Francis Ford Coppola's nephew.  The director's relationship with Cage's father, August Coppola, was also to some extent the inspiration for this movie. 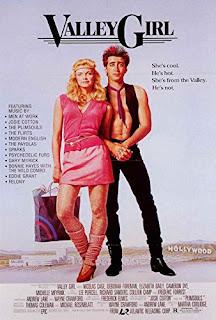 Not Bad But Completely Forgettable

A Hollywood boy (Nicolas Cage) falls in love with a girl from the valley.  You can probably guess how it ends.  There isn't much of a story to this one, but if you're a fan of 80s trivia you'll love it.  The soundtrack, the clothes, right down to the way people talk.

"Techno Rock."  Was that really a thing?  Was it the same as New Wave? 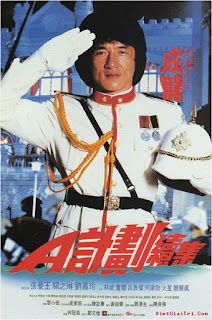 On the one hand it's great to see Jackie Chan, Sammo Hung and Yuen Biao in their prime, on the other hand I had a lot of trouble following the plot.  Something about catching pirates?  And Jackie Chan is in the navy, but then he's a cop?  And... grenades? 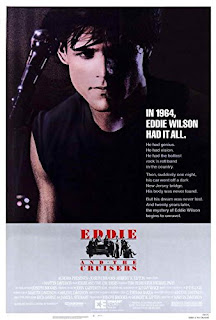 1. Eddie and the Cruisers

So anyway, there's this band, Eddie and the Cruisers, and then Eddie dies or commits suicide.  Years later some reporter comes to the conclusion that Eddie faked his own death, and then there's some nonsense about a lost album that everyone's trying to track down.  Tom Berenger's in it, and also Ellen Barkin, and Michael Pare, but I had a difficult time caring about the lost album, or the reporter's story, or whether Eddie was still alive or not.  I'm fairly certain this movie has a cult following it doesn't deserve.

Fun Fact: Michael Pare would go on to tread similar waters in Streets of Fire, which was released the following year.

The sequel no one expected and nobody really wanted.  It even has the audacity to use the famous shower scene from the original.  This movie doesn't make a lot of sense from the outset, with several members of Norman Bates' community somehow unaware of what he's done, the proximity of his hotel to where they live, and the fact that he's just been released from a psychiatric facility.  If you've lived in any small town, you'll know that the people there would have been talking about this for decades.

This said, of course when you rip off Hitchcock you're ripping off the best.  The Australian guy who directed Psycho II clearly had a lot of love for the original, but when your meticulously constructed plot revolves around the implausible stupidity of one character (in this case the character played by Meg Tilly), then it doesn't matter how carefully you've avoided plot holes. 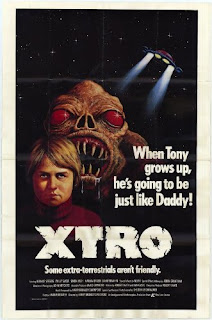 The director of this movie, Harry Bromley Davenport, was apparently going for the John Carpenter triple crown.  He directed, wrote much of the screenplay, and also performed the soundtrack.  Does he succeed in classic John Carpenter fashion?  Nope, but there's more than enough going on to keep this movie interesting.

Oh, and by the way it's British.  An alien invades your average British family, gore ensues, and by the end you're still not quite sure what was going on.  What's more the director has - for whatever reason - a lifelong dedication to the concepts laid out in Xtro, and it's possible that one day we'll see an Xtro 4 - more than four decades after the original.

Fun Fact #1: Former Bond girl Maryam D'Abo appeared in this six years before The Living Daylights.  She has several nude scenes throughout the movie.

Suggestion: If you like this one you'll probably also like David Cronenberg's The Brood, which came out four years previous.  The two films have a lot in common. 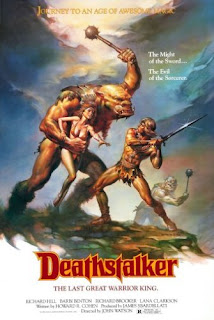 So Bad Everyone Should See It

Boobies & Swords & Sorcery.  Roger Corman produced this first of four movies about a dude and his ridiculously long sword.  It was filmed in Argentina and also features a lot of... puppetry?  Former Playboy model Barbi Benton appears as the princess, with some dude who doesn't even have his own Wikipedia entry as the Deathstalker.  It's wonderfully awful from start to finish.