"The Three Stigmata of Palmer Eldritch" by Philip K. Dick 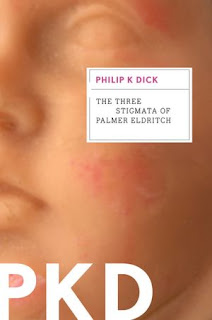 "Below lay the tomb world, the immutable cause-and-effect world of the demonic.  At median extended the layer of the human, but at any instant a man could plunge - descend as if sinking - into the hell-layer beneath.  Or: he could ascend to the ethereal world above, which constituted the third of the trinary layers."

The Three Stigmata of Palmer Eldritch was first published in 1965.  This would put it a year before Now Wait for Last Year, a book which shares many of the same themes.  It is one of the most famous of PKD's books, ranked alongside VALIS, A Scanner Darkly, and other classics.

Sometime in the future, mankind has moved on to colonizing other planets.  This process of colonization relieves population pressures on Earth, where global warming has made presence on the "outside" unpleasant - if not fatal.  Even so, earthlings are reluctant to leave their ancestral home, and membership among the colonists is achieved via a draft managed by the U.N.  Since conditions in the extra-planetary colonies are even more intolerable than those on Earth, most colonists turn to Can-D, a powerful hallucinogen, to escape the boredom of their everyday lives.  Into this situation arrives Palmer Eldritch, with a newer, better drug called Chew-Z, which he claims turns the user into God.

This is a good book, but I think it suffers from a few too many characters.  Unlike Now Just Wait for Last Year, the narrative within Palmer Eldritch is divided between a large group of individuals, which I think diffuses the suspense.  I enjoyed the more "religious" chapters near the end, but this one is a bit slow to get going.  I can understand the popularity of this book, but I think PKD wrote better.  This one, for me, was a bit too clever, and a bit less inspired, that some of his other books.
張貼者： Times Three 於 下午1:14