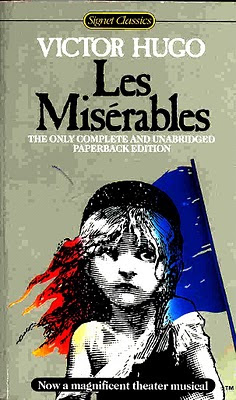 "Certainly they appeared utterly depraved, corrupt and odious; but it is rare for those who have sunk so low not to be degraded in the process, and there comes a point, moreover, where the unfortunate and the infamous are grouped together, merged in a single, fateful word. They are les miserables - the outcasts, the underdogs. And who is to blame? Is it not the most fallen who have most need of charity?"

I cannot say how faithfully my particular volume was translated from French into English, but I'm sure this book is even better in the original language. Hugo was nothing if not a man who had a way with words, and it is no accident that many of Dickens' books bring Hugo to mind. "A Tale of Two-Cities," for example, was not only adapted from an earlier book by Hugo, but Dickens' style of writing was in many ways an attempt to adapt Hugo's method of storytelling into English.

The story concerns the travails of Jean Valjean, an ex-convict who continually runs afoul of the authorities. Along the way he becomes very rich, gets blackmailed, and is even returned to prison on two separate occasions. The book is full of improbabilities - not unlike contemporaneous works by authors such as Dickens or the Brontes, but these improbabilities never detract from Hugo's breadth of characterization or his sense of pace.

Looming in the background is also the French Revolution, and the struggles between rich and poor that set the stage for this momentous chapter in human history. The historic events never overwhelm the characters, and the characters never serve to trivialize the larger events unfolding around them. Hugo was a master of balancing the personal lives of his characters against the historic, cultural, and economic contexts that defined them.

Suspend your disbelief when those coincidences occur, and you will enjoy this book. I can't give this one any less than 10 stars out of 10.
張貼者： Times Three 於 上午8:17