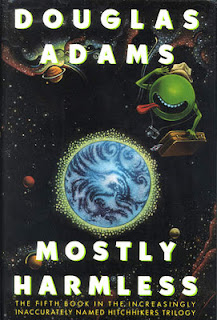 "Mostly Harmless" is the last book in "The Hitchhiker's" series.  It was published in 1992, about nine years before Douglas Adams' death.

I liked this book better than the previous installment, "So Long, and Thanks for All the Fish," but it was a bit of a downer.  Subplots involving a corporate takeover of the Guide offices, and Arthur's lost daughter border on the depressing, although there are some genuinely funny moments in this book.

According to Wikipedia, Adams had planned a sixth book to end the series.  Unfortunately, he didn't live to write that one.  Another writer has gone on to write this sixth book, but I refuse to read it.  A "Hitchhiker's" book that's NOT by Douglas Adams?  Why bother?
張貼者： Times Three 於 下午3:19