Some Other Movies From 2013

The top 5 highest-grossing movies of 2013 were Frozen, Iron Man 3, Despicable Me 2, The Hobbit: The Desolation of Smaug (yawn), and The Hunger Games: Catching Fire (double yawn, but Jennifer Lawrence is FINE).

As far as the award-winners go, it was an excellent year.  12 Years a Slave, American Hustle, The Wolf of Wall Street, Dallas Buyers Club and Her all came out that year.  I liked Gravity too, but I thought it was a bit overrated.

My favorite movies of that year are probably Gangster Squad, Upstream Color, The Iceman, Fruitvale Station, The Conjuring, August: Osage County, Prisoners, Inside Llewyn Davis and all of the award-winners mentioned in the paragraph above this one.

I doubt few would champion The Lone Ranger, which I consider the worst movie of that year.  You would think that after this movie studios would have stopped giving piles of money to Johnny Depp, but somehow studios never quite learn their lesson. 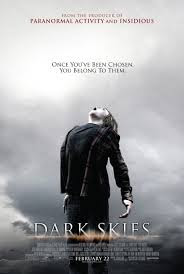 "Two possibilities exist: either we are alone in the universe or we are not."  ...but see the part of that quote the filmmakers failed to include was "Both are equally terrifying."  I guess it sounded scarier without the second sentence.

In Dark Skies an American family endures a Poltergeist-style alien invasion.  Aside from wondering if and when someone was going to end up in the living room TV, I enjoyed it.  It's by no means classic, but it builds up a fair amount of suspense over its 1.5 hour runtime.

2. Welcome to the Punch

James McAvoy and Mark Strong face off in this stylish British crime thriller.  The script was declared "one of the best unproduced British screenplays" prior to its entering production, and I'd have to say that yes, it made for a very good film.  After the success of Get Out it's slightly jarring to hear supporting cast member Daniel Kaluuya speak in his native British accent, but Welcome to the Punch is a solid action film along the lines of Michael Mann's Heat.

Hey there's James McAvoy again.  In this one he appears with Vincent Cassel (yay, Vincent Cassel!) and Rosario Dawson.  Danny Boyle directed.   The title refers more to the hypnotic state and less to the type of music.  One could make a convincing argument that this movie is a case of style over substance, but even so it's very stylish, and very entertaining.

It's not hilarious or anything - and that strip club sequence exists only for the sake of tits and ass - but The Internship is... ok.  Vince Vaughn is about 50/50 for me, and Owen Wilson is about 25/75, but they're both relatively engaging in this movie about two older guys who want to work at Google.

Are all Indonesian police stations and prisons really so shitty?  Or is this some kind of movie trope, to make their characters seem tougher?

I'm guessing the fact that someone greenlit this movie had something to do with the success of The Raid.  But I could be wrong.  An American gets caught up in a bombing, and the plot ventures into Lethal Weapon territory from there.  Oh, and Mickey Rourke of all people shows up as a Malaysian (?) Muslim (?) terrorist (?).  There's some out-of-the-box casting for you!

The action scenes are stricly B movie fare, but the setting makes it more interesting than would otherwise be the case.

A team of Navy SEALS waste thousands of our taxpayer dollars in Afghanistan.  Mark Wahlberg, Ben Foster and Taylor Kitsch are excellent in this movie, and the characters are very engaging throughout.  My only complaint is the movie's title, which gives the ending away.  I think Peter Berg, who directed this one, is very underrated as directors go.

This movie also gets extra points for Eric Bana.

7. Out of the Furnace

Braddock, Pennsylvania.  Maybe it has some nicer parts, but in this movie it looks like a real shithole.

Christian Bale and Casey Affleck star as two brothers who cross paths with a gangster played by Woody Harrelson.  It's a good movie, but more of a cat and mouse game between Bale and Harrelson would have made it better.  As it is it just kind of... ends, and all the great buildup prior to that point is wasted.

Michael Fassbender leads a star-studded cast as a lawyer mixed up with Mexican drug cartels.  Director Ridley Scott took Cormac McCarthy's script and ran with it, so you know this one's going to get DARK.  Depending on your love (or lack thereof) for McCarthy, the result is either a harrowing portrait of greed and human frailty OR a pretentious movie full of awkward dialogue.  For my part I loved it, and I'll probably watch it again soon. 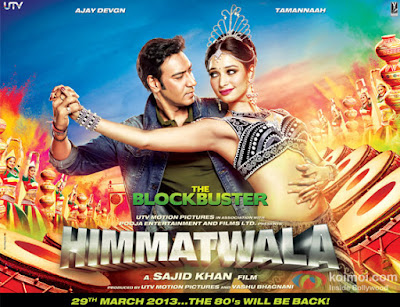 You've heard the Donna Summer version of "Thank God It's Friday," but have you heard the Telugu version?  A local badass returns to his hometown to confront an evil land baron.  In between the opening credits and his inevitable victory the (very beautiful) love interest sings songs, and the guys try to out-macho each other.  My favorite part is when HE GETS INTO A FISTFIGHT WITH A TIGER.

Fun Fact #1: This movie is a remake of a remake.

Fun Fact #2: This movie was a huge bomb.

Now that we've all contacted our personal trainers, let's bulk up and put on our tough guy clothes!

Vin Diesel says predictably manly things and does cool stuff in slow motion.  The assholes who try to kill him die predictably violent deaths.  Aliens show up - predictably.  Where have I see all this before?  Oh, that's right.  Pitch Black!

Fun Fact: Vin Diesel only appeared in The Fast and the Furious: Tokyo Drift so that he could get the rights to the character Riddick. 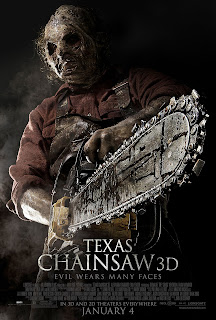 Not Bad or Good, It Just Was

Alexandra Daddario and Scott "I'm not the actor my dad is" Eastwood work their way up the ol' Hollywood ladder with Texas Chainsaw 3D.  The results are mixed.  On the one hand it's WAY better than 2017's Leatherface, and on the other it's still not very good.  This particular sequel ignores the 2003 remake and pretends to be the successor to the 1974 version of Texas' first family.  There's some good gore on offer, and Gunnar Hanson appears in it, but aside from these two facts there's not much else to be said for this movie. 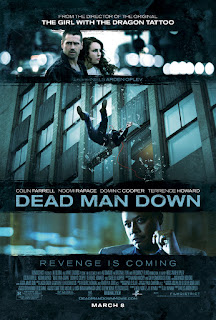 It's taken Hollywood a while to learn that you don't cast Colin Farrell as the lead in your movie.  Supporting cast member maybe, but definitely not the lead.  Farrell (unfortunately) stars in this movie as a man out for revenge - essentially The Punisher - and it's hard to say whether its Farrell's acting skills or just bad writing that makes his character come across as entirely too self-possessed to do what he is doing

Terrence Howard is, moreover, completely wasted on this movie.  He plays pretty much the same character he plays on the TV series Empire, though without the frightening ex-wife and the hip hop.  To make matters worse Noomi Rapace's accent is all over the place.

But I think the biggest problem with this movie is the pacing.  The whole thing seems like it's moving at the wrong speed.  There's a good scene between Farrell and Howard halfway through the movie, but aside from that everything about Dead Man Down seems to be happening either too slowly or too quickly.

By turns boring and pretentious, this Hong Kong movie is part action film, part love film, and part historical drama.  It's a movie suffering an identity crisis, and despite a strong beginning it quickly degenerates into long, thoughtful glances from Zhang Ziyi and the kind of self-important dialogue that sounds ridiculous in real life.

Perhaps worst of all, this movie made me miss the kind of Kung-fu movies I grew up with.  Back before everyone was suspended from wires.  Back when there was real, perceptible, physical danger involved.  Countries such as Thailand, Indonesia, and even India are still making visceral martial arts-themed movies like that, but this?  It's like watching a pale shadow of all the better movies that came before it.

Doctor Strange and Baron Zemo - ahem, excuse me - Benedict Cumberbatch and Daniel Bruhl - star as Julian Assange, founder of Wikileaks, and his German friend.  It wears out its welcome quickly, and many of the graphics used detract rather than add to the story.

Fun Fact: This wasn't the only time Cumberbatch played a socially-challenged mathematician.  He would do so again in The Imitation Game.

This movie seemed overrated when it came out in 2013, and having seen it in 2018 I can confidently assert that yes, it's overrated.  Two girls are abandoned in a spooky old house and are looked after by a ghost.  I never found the ghost scary, and the plot is fairly predictable.

Bollywood movie about a con man seeking revenge.  What I'm going to remember about this movie is the shots of dudes walking down sets of stairs into hotel lobbies.  Endless.  Shots.  Of stairs.  Of dudes.  Walking.  Into hotel lobbies.  Oh, and designer sunglasses.  Lots and lots of designer sunglasses.  The rest of the movie is sheer nonsense, and only the presence of the stunning Deepika Padukone makes it halfway bearable.

I'm tempted to put this one in the "so bad it's good" category, but I think in terms of "bad goodness" (good badness?) it's overshadowed by Himmatwala above.  You just can't beat a fistfight with a tiger.

Fun Fact #1: Padukone was a nationally ranked badminton player prior to becoming a fashion model.

Fun Fact #2: Anil Kapoor, who also appears in this movie, was the star of Race, its prequel.  He might be more familiar to Western moviegoers as the Indian millionaire in Mission Impossible: Ghost Protocol.  He was also host of the game show in Slumdog Millionaire.  He's been appearing in Bollywood movies since 1971.