"The World is Flat: A Brief History of the Twenty-First Century" by Thomas Friedman 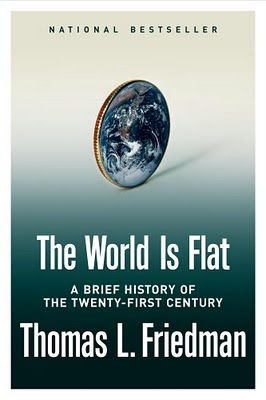 The trouble with writing any book about business, technology, and how they shape the future is that your book is likely to be irrelevant before it is even a few years old. This being the year 2011, and “The World is Flat” having been written in 2004, there are naturally a lot of examples, and counterexamples, that are going to be omitted simply because they didn’t exist seven years ago.

For example, this book was published before the rise of Facebook, before the election of Barack Obama to the office of U.S. President, and also the HUGE depression that the U.S. economy experienced prior to Obama’s election. In short, the world of 2011 is vastly different from the world of 2004, and any book written about business, technology, and the future of both is bound to come up a bit short in light of recent developments.

I didn’t find “The World is Flat” to be a very wise or insightful book, even though it was written by a Pulitzer Prize winner. A lot of the techonological trends outlined by the author have been ongoing since the late 90s or earlier, and I found myself wondering at the supposed “objectivity” of his reporting. It is worth noting that almost everyone he interviews about the coming of this “Flat Earth” is someone who is a) already quite wealthy, and b) someone who will benefit from it.

The author’s contention is that inventions such as the internet, fiber optic cable, and other modern conveniences all contribute to the “flattening” of our globe, and the breaking of the old barriers between peoples and nations. I would not argue this point. What I would argue, however, is that this “flattening” is not in all cases desirable, fair, and humane.

What, after all, about the millions of people who DON’T benefit from unrestrained free markets? After all, the author assumes that countries such as the U.S., India, and China are participating in these markets under the same rules, when this is far from the case. Shouldn’t the manufacturer in Illinois have some protection against his business moving to China, if the manufacturing in China is done with substandard materials or utilizes unfair labor practices? The author fails to recognize the fact that economic policy and political policy are often one and the same thing, and a country’s pursuit of free market principles does not always mean protection of its citizens best interests.

Besides this, there is also the environmental cost. Nowhere in this book could I find more than the briefest mention of what all this “outsourcing” to countries such as India and China means for the environment. It is beyond debate that many of China’s manufacturing processes and emissions standards lag far beyond those of the U.S., so is it conscionable for the U.S. to outsource to that country? In this case the author is advocating the passing of modernization’s “opportunity cost” to less developed nations, and I cannot see how this is either the responsible or prudent thing to do. Just because they want all those cars, and air-conditioners, and MP 4s - does that mean that we should help them?

I wouldn’t recommend “The World is Flat,” and for more reasons that I have outlined above. I think it is a poorly written, poorly researched book, and there must be something better out there. The author might have chosen a smaller, more manageable subject, and trying to forecast the rest of this century from the year 2004 was a bit premature. I would give him points for trying, but then again I believe that this kind of book causes more harm than good. I shudder to think of U.S. government officials reading this book and thinking, “Trade policy? Who needs it!”