"New Mutants Forever" by Chris Claremont and Others 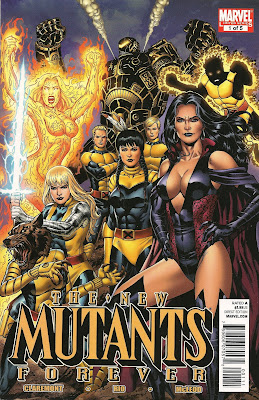 I have fond memories of reading The New Mutants back in middle school. This was before Rob Liefeld took over the book in the 1990s, and the X-men side of the Marvel Universe got that "paramilitary" look.
Chris Claremont wrote all of the stories collected in this TPB, which is only fitting since he created the New Mutants in the first place. For those who don't know, Claremont is most famous for his run on the X-men comics, in particular the "Dark Phoenix Saga." He also resides in the Pacific Northwest, and I once got the chance to speak to him at a local comic book store.
As a comic book fan, I can't say that Claremont is one of my favorite writers. Even as a 13-year-old, his characters' penchant for monologues always struck me as slightly ridiculous, and his run on X-men always had a soap-opera vibe that seemed, to my young sensibilities, the opposite of cool. I realize that many of his comics were more accessible to the fairer sex for these very reasons, so maybe I should just assume that he wasn't writing for kids like me.
"New Mutants Forever," is pretty much more of the same from Chris Claremont. The Mutants journey to a "New Rome" in South America, and cross paths with the Red Skull. The artist for this storyline, Al Rio, draws a lot like George Perez.
Which reminds me of why I really used to like The New Mutants: the art. For a while Bill Sienkiewicz, one of my favorite comic artists of all time, was drawing this series on a regular basis. I only wish he'd returned for this follow-up. This TPB includes some of the variant covers he did, and I'm only sorry I couldn't see more of his work in this volume. 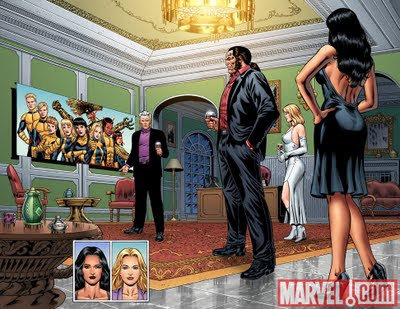