Some Other Movies From 1995

I thought it over, and I'm pretty sure that in 1995 I was working at Home Depot, and living near Green Lake.  It was a good year for me.  I suppose that year was when I was learning how to be an adult.

The top 5 movies of 1995 were Toy Story, Die Hard with a Vengeance, Apollo 13, GoldenEye, and Pocahontas.  GoldenEye remains one of the best Bond movies, and it should be noted that it was also directed by Martin Campbell, who later directed Daniel Craig in Casino Royale.  A lot of people think Judi Dench was introduced as Q in the Daniel Craig movies, but her first appearance as the character was in GoldenEye.

Oh, and Se7en came out that year too.  I'd be hard-pressed to say which was better, GoldenEye or Se7en, but they're both indisputably great.  As a huge Bond fan I'm inclined to say GoldenEye, but yeah, Se7en...

Other good movies from 1995 were Braveheart, Leaving Las Vegas, Murder in the First, Apollo 13, The Usual Suspects (big year for Kevin Spacey), 12 Monkeys, Trainspotting, In the Mouth of Madness, The Quick and the Dead, Rob Roy, The Basketball Diaries, Crimson Tide, Kids, Desperado, Showgirls (a very misunderstood movie), Dead Presidents, Casino, Wild Bill and Heat.  It's hard to believe Casino and Heat came out the same year, but then again the early 90s were a good time for gangster movies.

Worst movie?  I'd nominate Batman Forever.  I grew up reading Batman comics, and even I had a hard time focusing on this movie.  Something about it just seemed so all over the place, as if it didn't know what it wanted to be, or why. 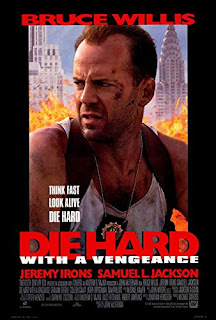 1. Die Hard with a Vengeance

Surprisingly, I'd never seen this before.  In this one Bruce Willis and Samuel Jackson team up to stop Jeremy Irons.  Director John McTiernan uses New York in the way he used the skyscraper in the first movie.  I liked it more than the first one, but then again I've never understood the popularity of the first one.

In a way it's too bad Jeremy Irons is so much older now.  He would have been the perfect choice to play David Bowie whenever that biopic is inevitably made.

2. Ghost in the Shell

Don't bother with the more recent live-action version.  It's boring.  It's like a mountain made out of a molehill, or at best an excuse for Scarlett Johansson to walk around almost-nude.  The original anime is far better, even if the animation looks a bit dated now.  Just get settled in with a nice cup of coffee, because it gets kind of deep.

3. Whisper of the Heart

Fun Fact: This anime was produced by Studio Ghibli, the same studio that produced the celebrated Spirited Away.  It was directed by a different person however, and didn't enjoy the same level of success.  A sequel, The Cat Returns, was released in 2002.

4. Tales from the Hood

Inner-city, episodic horror film in the tradition of Creepshow and Tales from the Crypt (below).  I was prepared to hate it, but as it turns out it's really good.  The fourth of the four parts, reminiscent of A Clockwork Orange, is somewhat preachy and obvious, but the first three parts were well done.  I particularly liked the second part, featuring a standout performance by David Alan Grier.

Fun Fact #1: David Alan Grier also appeared in Jumanji (below).  I always felt like that guy should have been more famous.

Heartwarming and all, but going out into the woods and boiling whatever plants you find will probably kill you at some point.  In The Cure two boys become friends while one of them contends with AIDS.  It's well-acted and suitably understated.

Documentary centered around Rickson Gracie's participation in the Vale Tudo tournament.  It was 1995, so ultimate fighting wasn't really a thing yet, and the sport is referred to as "no-holds-barred fighting," "street fighting," and "freestyle fighting" at different points in the documentary.  I'm still not a huge fan of this sport but the documentary was interesting. 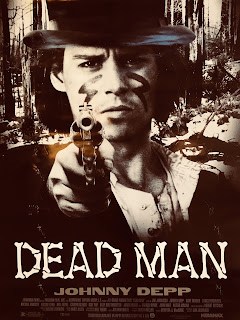 Two That Are Just Alright

Predictably arty film by Jim Jarmusch.  Johnny Depp stars as an accountant in a Western frontier town.  Interesting cast, but it moves very slowly and I didn't like it as much as some of Jarmusch's other films.  Reviewers have compared it to Cormac McCarthy's book Blood Meridian but it's not nearly that good.

Documentary on the state of fashion in 1995, featuring Christy Turlington.  Being a heterosexual man, I could only enjoy this one so much, but it passes by quickly enough.  Not very much depth to it, however. 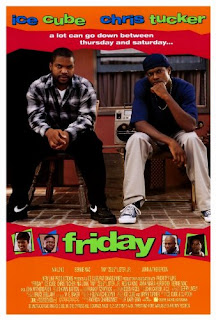 Five things about this movie:

a. Chris Tucker totally carries the whole thing.  I guess Ice Cube could claim he was playing the straight man, but naw - it's Chris Tucker front to back.

b. It needs more of a plot.  There are some funny bits in it, but in between the funny bits not much happens.

c. The soundtrack needed work.  Whoever did it needed to think about how a good soundtrack anticipates and builds on the mood of each scene.  As it is, songs come on occasionally and it's always a relief when they do.  There's too much talking over silence.

d. This movie wasn't, in my opinion, a success in terms of quality.  Yeah it made money, but it's just not very good.  This said, its heart was in the right place, and director F. Gary Gray went on to make much better movies.  At least some of what Ice Cube learned in the making of Friday contributed to the far superior Straight Outta Compton.

e. This movie's cross-cultural appeal is not to be underestimated.  I watched it with my Taiwanese wife, and she thought it was hilarious.  At first glance it seems very "black," very inner-city, but a lot of what people like about Friday crosses cultural barriers.  My wife grew up in a small farming village not far from the Taiwan Strait, and yet this movie still reminded her of people, places and things from her hometown.

It's not so much that the cgi looks so dated, but that the rules of the board-game-turned-real are so arbitrary.  It's hard to stay invested in the plot when from moment to moment literally anything could happen.  As such movies go I think 2005's Zathura was much better, and even the more recent Jumanji: Welcome to the Jungle is head and shoulders above the original.

I'm just wondering though, which timeline is Jumaji: Welcome to the Jungle set in, exactly?  The one where Robin Williams' parents die or the one where they don't?

4. Tales from the Crypt: Demon Knight

Gore with a side of big 'ol titties.  It has the same campy tone as the cable TV show, but as it turns out it's a lot harder to sustain that tone over the course of a 1.5 hour movie.  Billy Zane (!) and William Sadler star.  The plot?  Some nonsense about preventing hell on Earth.

Fun Fact #1: The sheriff's deputy in this movie is played by Johnny Depp's Indian friend in Dead Man.

Fun Fact #2: This movie was supposed to be the second part of a trilogy.  Various production difficulties led to it appearing first, before the proposed first part.  A sequel of sorts, Bordello of Blood, was released a year later.  I have no doubt that Bordello of Blood features even more big 'ol titties, and also a healthy dose of gore.

Damn Charles Bronson was a bad actor.  In this one he stars as the head of - you guessed it - a family of cops.  The extremely formulaic script keeps it from spilling over into so-bad-it's-good territory, but it's definitely not great. 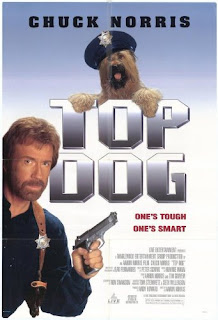 Master thespian Chuck Norris and an unbelievably irritating dog team up to solve crimes.  It's only 1.5 hours long and yet manages to make almost no sense at all.  Uh... drugs?  Uh... Neo-Nazis?  Uh... what? 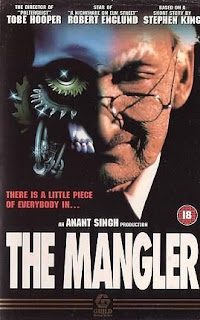 Tobe "Texas Chainsaw" Hooper directed this movie about a industrial washing machine that kills people.  The most famous person in the cast is Robert Englund.  Apparently they didn't have enough money in the budget for an actual police uniform for the lead character, and the acting is predictably bad throughout.

I got about halfway through and had to quit.  Between the first death and the foregone conclusion that is the machine's destruction, this movie goes nowhere.