Some Other Movies From 1979

And by the way, if we assume that I've watched 15 movies for each year, my tally at the present time is 585 movies.  Doubling that gives an approximate number of hours I've lost - irretrievably - writing these entries.  The upside is that I win almost any movie-related argument.  The downside is that my mind is a freaking ocean of movie trivia.  I could seriously bore you with discussions of various actors, actresses and directors.

Anyway, on to 1979, the year in which I turned four.  The top five movies of that year were Kramer vs. Kramer (still great), The Amityville Horror (hasn't aged well), Rocky II, Apocalypse Now and Star Trek: The Motion Picture.  People will probably think I'm crazy for saying this, but of those five Star Trek: The Motion Picture is still my favorite.  It's long, it's ponderous, but in its way its even trippier than Apocalypse Now.

Other good movies from that year included Alien, 10 (there's Dudley Moore again), Moonraker (James Bond in space!), Norma Rae (excellent), Being There (masonic symbols abound), 1941, All That Jazz (one of my favorite movies), Monty Python's Life of Brian, Breaking Away, The Brood (classic), Time After Time and Woyzeck.  There are a lot of movies I either haven't seen or can't remember from that year, so the above list should be taken with a generous grain of salt.

I can't pick a worst movie for that year because my understanding of late 70s film trends is lacking.  I will say that I never understood the appeal of Meatballs, even if I'm a big fan of Bill Murray. 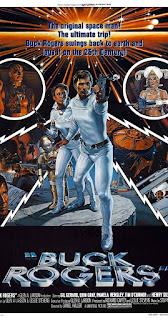 It'll Put a Smile on Your Face

1. Buck Rogers in the 25th Century

Erin Gray.  DAMN that woman was fine.  I can remember having a crush on her back when this show was still on TV, and four decades later I'm just as impressed by how beautiful she was.  What a woman!

This TV pilot is Star Wars with a touch of Moonraker.  Buck Rogers, an astronaut from 1987, finds himself in the future after some kind of wormhole something puts him in suspended animation.  The script was well-written, the women are stunning, and Gil Gerard is great in the lead role.

Fun Fact #1: A lot of the special effects in this pilot (and the subsequent TV series) were recycled from the earlier Battlestar Galactica.

Fun Fact #2: Erin Gray would go on to appear in the Silver Spoons TV show after two seasons of Buck Rogers in the 25th Century. 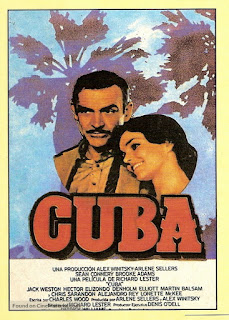 Bond alumnus Richard Lester directed this look at the final days of Batista's regime.  Sean Connery stars as a British soldier of fortune, with Chris Sarandon and Brooke Adams as members of the Cuban aristocracy.  In 2019 this movie would be in Spanish, and both Sarandon and Adams' roles would have been played by other people, but it's still a well put-together film that tackles the subject with more polish than other, better-received movies.  I think Adams was miscast as the love interest, but this is my only real complaint. 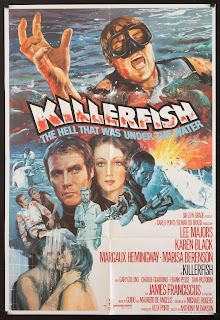 In this Italian-Brazilian-French production, Majors leads a team of jewel thieves as they attempt to expatriate a box of emeralds from the confines of Brazil.  Along the way a school of piranhas attempt to ruin the party, with Karen Black's screams adding a sense of peril to the film.  Overall it's cheesy fun, and I liked the disco soundtrack.

Fun Fact #2: This was released a year after Piranha.

A power company tries to cover up a near-meltdown at a nuclear reactor.  Jane Fonda, Jack Lemmon and Michael Douglas (who also produced) star.  It's a well-executed movie that had a good grasp of what people worried about in the late 1970s.

Not-So-Fun Fact: This movie was released just before the accident on Three Mile Island.

This is good in the way Killer Fish is good, only more so.  Lucio Fulci directed, and it has all the gore and beautiful women you'd expect.  In my opinion the golden age of zombie movies was the late 1970s, before they started overthinking the genre.  Zombi 2 was intended as a sequel to George Romero's Dawn of the Dead, and went on to become a very profitable movie.

...or something like that.  Al Pacino stars as a defense attorney trying to do the right thing in Baltimore.  The first 1/3 of this movie is GREAT, the second 1/3 is not so great, and the last 1/3 is very memorable.  Like Pacino's character, it's trying to do too much in too short a span of time.

I can't help but think that the version of America shown in this movie is gone now.  The rodeo circuits.  The corporate world's concern for Middle America.  Las Vegas at the height of its power.  We still have the shadows of all these things, but not the substance.  Seeing them as they once were is fascinating in and of itself.

In The Electric Horseman Robert Redford and director Sydney Pollack team up yet again.  In this instance it's for the story of a former rodeo star turned corporate spokesman, and the script is half romance, half commentary on corporate America.  Jane Fonda costars, playing a reporter not too far removed from the other reporter she played in The China Syndrome.

Oh, and this movie was also Willie Nelson's cinematic debut.  The songs he recorded for the movie were a big hit.

You just know that any movie featuring Roger Moore as a Nazi commandant is going to be a helluva lot of fun.  In Escape to Athena Moore's Nazis are reclaiming (stealing) art treasures on a Greek island.  Telly Savalas, Richard Roundtree and Elliot Gould costar.

This movie and The Cassandra Crossing (which I haven't yet seen) were what broke director George P. Cosmatos into the mainstream.  He'd go on to direct Rambo: First Blood Part II, Cobra, Leviathan and Tombstone.  His son Panos Cosmatos directed Mandy two years ago.

Fun Fact: Stefanie Powers, of TV's Hart to Hart, is in this.

Idle Speculation: Telly Savalas was the Vin Diesel of his generation.

A boy befriends a horse after the two of them are stranded in North Africa.  Definitely one of the best movies of 1979.

Gang warfare in the near future.  In a way this movie is like A Clockwork Orange, but without the genius of Stanley Kubrick to back it up.  In another way it's a solid action movie along the lines of (the later) Escape from New York.  This was one of Walter Hill's earlier films, and unlike later entries it's not macho enough to be off-putting.

Fun Fact: Michael Beck, the star of this movie, would go on to star in the disastrous Xanadu the following year.  "Xanaduuu/Xanaduu--uu-uu..." 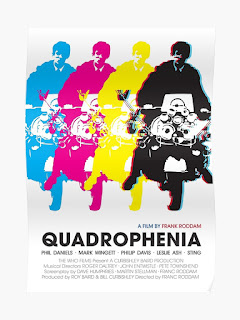 Dead boring.  Where Tommy was gloriously weird 70s rock n' roll craziness, Quadrophenia is a much more earnest take on what it meant to be a young person in the early 60s.  I'm not that well informed on the Mods vs. Rockers feud, but it all seemed fairly pointless to me.  Critics (at the time at least) loved it, so feel free to ignore my thoughts on the matter.

Fun Fact: Sting is in this.  He shows up about halfway through.

Beverly Johnson.  Damn.  I had to watch that nude swimming scene twice just to get it out of my system.  She even manages to make Erin Gray look average.  Is it just me or did Michael Caine have a talent for being in movies with achingly hot women?  Aside from Beverly Johnson, there's also the "princess" from The Man Who Would Be King.  He even ended up marrying that princess in real life.

In Ashanti, Caine stars as a foreign aid worker who's stumbled into the African slave trade.  The white savior motif aside, it starts out decent but gets real dumb real fast after William Holden shows up.

In The Champ Voigt stars as a washed-up boxer trying to make a big comeback, with Dunaway as his ex-wife.

I just couldn't get into this movie.  Voigt's character is impossible to empathize with, Schroder's is annoying, and Dunaway's is barely there.  There doesn't seem to be any "through line" in this film, something leading the viewer from the beginning to the end.  And for what's ostensibly a boxing movie there's very little boxing to be found in The Champ.

The first half of this low budget horror movie is quite good, but halfway in it takes a detour into I-Don't-Know-What-The-Fuck-Is-Going-On Land.  The biggest problem is that they didn't think through the killer's psychology.  The director also had trouble deciding if he was going for Carrie, The Texas Chainsaw Massacre, or House of Wax. 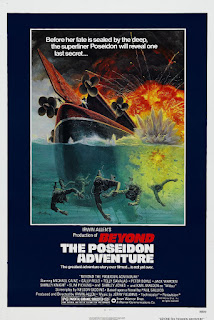 1. Beyond the Poseidon Adventure

...lest we forget that the 70s were the golden age of disaster movies.  The same decade that saw Airport, The Towering Inferno and Earthquake also saw Beyond the Poseidon Adventure.

I have no idea how they roped Michael Caine and the always-adorable Sally Field into this thing, but the script was doing them no favors.  And to top it off it looks incredibly fake from the get-go, with a boat that's obviously mounted on some kind of lift bobbing up and down in front of a screen.  From that point onward?  I suggest you see for yourself!

Fun Fact #1: Sally Field would go on to win the Academy Award for Best Actress the following year.