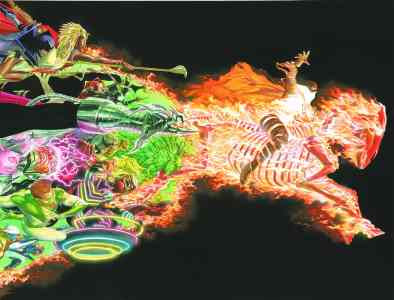 I haven't read Dark Age #1 yet, but I plan on doing so as soon as I come across it. This series is great, if not flashy. It is exactly what it aspires to be: a look back on some of the great comic books of the 70s and 80s, with the solid writing and art that made those comics so popular.

Anyone who, like me, grew up in the eras of Carter, Reagan, and Bush Sr. will find a lot to like in "Astro City." Kurt Busiek's writing recalls the work he did on "Marvels," and also Denny O'Neill and Neal Adam's run on Green Lantern/Green Arrow back in the day. There is a lot going on in this TPB, and the plot threads are are not only tied together skillfully, but also lead to a satisfying conclusion.

Brent Eric Anderson's art is competent without getting in the way of the story. Alex Ross's covers are also included in this TPB, though to be honest I could really care less about Alex Ross. His art always struck me as somewhat soulless, and I was happy that someone else was drawing the story between the front and back covers.

Much of the plot concerns itself with the struggles of two brothers, and their quest for revenge. They chase after a bureaucrat in a criminal organization who murdered their parents, and it is through their trials that we see the larger events of Astro City unfold. This formula has also been employed in the above-mentioned "Marvels" and also in DC's "Kingdom Come," but I found the human protagonists in "Astro City" more compelling.

Anyone looking for an alternative to the usual Marvel/DC superheroics is hereby directed to Astro City. It's not only a step back in time, but also a breath of fresh air in a genre that often grows stale. 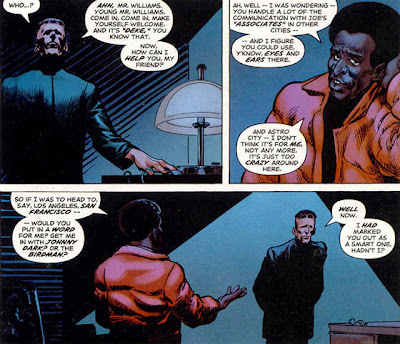