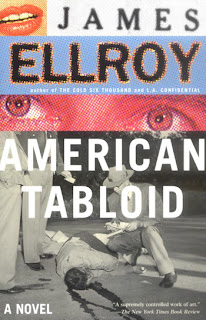 "'Repartee is one thing, Mr. Boyd, and the truth is another.  The truth is that my robber-baron father fucked my movie-star mother and got her pregnant.  My movie-star mother had already had three abortions and didn't want to risk a fourth.  My movie-star mom disowned me, but my father enjoys flaunting me in front of his legitimate family once a year.  The boys like me because I'm provocative, and they think I'm nifty because they can't fuck me, because I'm their half-sister.  The girls hate me because I'm a coded message from their father that says men can fuck around, but women can't.  Do you get the picture, Mr. Boyd?'"

Now THIS is what I'm talking about.  This is Ellroy, and this is a good book.  For sure.  I tell you, after struggling through Dickens' "Christmas Books," this book couldn't have come at a more opportune moment.  THIS, I tell you, is the shit.  This is the goods.  This is the real deal.

Dickens only ever wrote a word to offend Victorian sensibilities.  Ellroy, on the the other hand, has words to offend everybody, and I'm sure his books will continue to offend, long after the time in which they were written.

American Tabloid is the first book in Ellroy's "Underworld Trilogy."  It is the last in this trilogy for me.  I read The Cold Six-Thousand, loved it, and then moved on to Ellroy's most recent work, Blood's a Rover.

I thought Blood's a Rover was deeply boring and gratuitous, and it made me wonder why I liked Ellroy in the first place.  I am happy to say that American Tabloid has restored my faith in this author, and I now look forward (once again) to Ellroy novels yet to come.

Like The Cold Six-Thousand and Blood's a Rover, American Tabloid covers crime and political conspiracies in the 50s, 60,s and 70s.  The characters will be familiar to anyone who's read the other two books in this trilogy, and even though there are some inconsistencies between books, the plot of American Tabloid was obviously thought out to the last detail, and Ellroy's knack for both characterization and racial slurs take center stage throughout.  It's a masterful book, and almost backs up Ellroy's claim to be "the American Tolstoy."

I recommend this book without reservation.  It's brilliant.
張貼者： Times Three 於 上午10:46