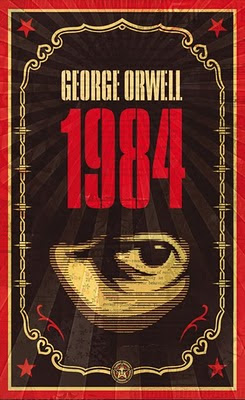 I remember being forced to read "Animal Farm" back in high school. I hated it. I thought it was one of the most labored, pretentious things I had ever read. 18 years later, I cannot say whether or not I would hold the same opinion. Maybe I would find something in the book that escaped me at 18 years of age, or maybe I would find it to be just as dull, uninspired, and annoying as I remember.

Whatever the case may be, I am happy to say that 1984 is a great book. It feels fresh and new, even though it was written 62 years ago. It has a lot to say about our world, our lives, and the way we manage both. It is a book about the future, written long before I was born, but it feels like it was written yesterday.

1984 follows the trials of Winston Smith, as he struggles to survive daily live in Oceania. Oceania in this case does not refer to Australasia, but rather to a future empire composed of the British Isles, the Americas, and the southern tip of Africa. The world of Oceania resembles, in many ways, the Soviet Union during the height of its power. This similarity was probably not intentional. Oceania could be anywhere, and could be around the corner for any country or group of people, given the right (or wrong) set of circumstances.

I can't say much else about the book without giving away much of the story, and discovering this story within the novel is much more fun than reading about it here. I would give this book ten out of ten stars, because it's timeless.

And incidentally, anyone who liked this book will probably also like a book called "The Gulag Archipelago," by Aleksandr Solzhenitsyn. It covers much of the same subject matter, even though it was written about the Soviet Union. Philip K. Dick's "The Man in the High Castle" also touches upon similar themes, and both are excellent choices if you have already finished 1984.
張貼者： Times Three 於 上午8:11