Some Other Movies From 2002

Up into the 2000s now are we?  In case you're wondering if I ever go outside, I'd like to tell you that yes, I do go outside - very often.  I took part in a triathlon last weekend, I exercise six times a week, and no, I don't still live in my parents' basement.

Watching 4-7 movies per week has put me in the year 2002.  Given that I wrote the Some Other Movies From 1980 entry in September, and that for each entry I watched at least 15 movies, this means that between that entry and this one I've watched over 165 movies, and that's not even counting films that I've seen in theaters.

But perhaps I digress?  Or maybe that was the one time I failed to do so.  Anyway, on to historical/biographical info...

In 2002 I was living in both Taichung, Taiwan, and Seattle, in the great state of Washington.  I was very definitely a dad at that point, married for two years, and on the way to graduate school.  I can't recall anything about my movie watching habits during that time, though I can remember seeing The Lord of the Rings: the Two Towers, Spider-Man, Signs, and the first Ice Age in theaters.  I could be wrong, but I believe I saw all of those movies in either the Tiger City shopping mall or the Shin Kong Mitsukoshi department store in Taichung, Taiwan.  I recall being somewhat disappointed by Spider-Man.

Aside from the above-mentioned movies, other big movies of that year included Harry Potter and the Chamber of Secrets, Star Wars Episode II: Attack of the Clones, Men in Black II, Die Another Day, My Big Fat Greek Wedding, and Minority Report.  Of those 2002 blockbusters I think Minority Report was the obvious winner, and that Star Wars Episode II and Die Another Day (a Bond film) represent the worst their respective franchises have to offer. 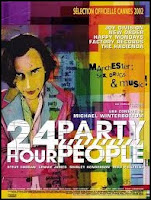 Steve Coogan stars in this pseudo-documentary about the Manchester music scene.  I'm not into any of the bands discussed in this movie, but it's well acted and has some clever twists.

Two problems with this movie: 1) Ving Rhames' character, with all his money, wouldn't have ended up in a prison like Sweetwater over rape.  Without an actual video, his lawyers would have had that conviction whittled down to something much less substantial.  And 2) How is he going to reclaim his title after his incarceration anyway?  They would have taken away his boxing license, and without a sanctioned bout his lost title would have remained beyond reach.

The above said, Undisputed is a good prison boxing movie.  Ving Rhames and Wesley Snipes were in great shape, and the movie's thoroughly involving.  The direction stumbles a bit at the outset, but anyone who likes boxing films will enjoy this movie.

Fun Fact: That director, by the way, is Walter Hill, the same guy who directed 48 Hours.  As you might be aware, I'm not a big fan of his work, but he does a decent job here.

For a much more informed look at gun control, I recommend the book The Politics of Gun Control.  It says many of the same things as Bowling for Columbine, but in a much more organized, much less manipulative fashion.

As documentaries go, Bowling for Columbine is literally and figuratively all over the map.  It makes some good points, but these points are often obscured by strange rants about American history, and by Michael Moore's need to place himself in front of the camera as much as possible.  I think it's worth seeing, but I'm sure there are better gun control documentaries out there.

How old were Jake Gyllenhaal and Jared Leto in 2002?  In this movie they look all of 16.  However old they were, they're good together in this pseudo-eulogy of Seattle's grunge scene.  The movie's set in 1994, and Seattle is where the pair end up after eluding vengeful mobsters.

Mel Gibson stars as a soldier (general?) leading an elite helicopter squadron during the Vietnam War.  When you think about it, Gibson's been involved in several wars; the First War of Scottish Independence (Braveheart), the Revolutionary War (The Patriot), the First World War (Gallipoli), the Second World War (Hacksaw Ridge), and the Vietnam War (both this movie and Air America).  Aside from Air America, I would have to affirm that all of these movies - if not the wars they portray - are very, very good.

From a storytelling standpoint, this is the polar opposite of Trapped (see below).  With this movie all bets are off, the story's told backward, and the viewer is left to draw his or her own conclusions.  As one of the two men say in the beginning of the film, "There are no crimes, only actions."

This said, parts of this movie are really hard to watch.  Irreversible is sometimes bundled in with the other "New French Extremity" films, so be warned and bring a strong stomach.  Monica Bellucci and Vincent Cassell (two of my favorite actors) deliver strong performances,  and it's both as arty and as philosophical as one would expect.

I find that when critic Roger Ebert used the words "offensive" and "unwatchable" to describe a movie, I usually end up enjoying it a great deal.

Dudes do stunts.  In the course of said stunts dudes often get hurt and/or puke.  Some of the stunts are funny.  Many of the stunts aren't.  Still, if you're bored enough this movie's not bad.

Sandra Bullock is GREAT in this movie.  It's definitely not Se7en, but her performance as a detective is some of the best work she's ever done.  Ryan Gosling is in this movie too, and like Jared Leto and Jake Gyllenhaal in Highway he looks all of 16 here.

I was a bit drunk when I watched this, so I figure that if any comedy was going to be funny that would have been the time.  The whole getting into college motif seemed very tired to me, and the misplaced container of piss gag seemed even MORE tired.  Yeah, it's probably Jack Black's funniest movie, but that's not saying much.

Ashley Judd, Morgan Freeman, and Jim Caviezel star in this military courtroom thriller.  The first half's not bad, but in the second half the plot grows too convoluted for its own good.  Worst of all is the movie's ending, which is just dumb.  Military training?  Who?  When?  Where?

The trouble with movies like this is that there's a certain morality implied.  Everyone, even the bad people, behave within certain limits.  So you know, for example, that Kevin Bacon's never really going to rape Charlize Theron, for the simple reason that such a rape would alienate this film's target audience.

Trapped is the story of a kindnapping.  They arrive at Theron's house, they take her daughter, and you can probably guess the rest of the plot from there.  Theron and Bacon do their best with a formulaic script, but the direction often puts style over substance.

The dog's name is "Colossus," for chrissakes.  Van Wilder hasn't aged well, but fans of Deadpool might enjoy certain similarities between that movie and this one.  Ryan Reynolds has been a lot funnier in other movies, and gags involving incontinence were already tired back in 2002.

5. The Count of Monte Cristo

Jim Caviezel and Guy Pearce star in this film adaptation of Dumas' novel.  It's faithful to the book, lumbers along in uninspired fashion, and you'll probably have forgotten most of the details soon after it's over.  Caviezel would give a more memorable performance in 2004's The Passion of the Christ, and Pearce would star in the much better remake of The Time Machine the same year that The Count of Monte Cristo appeared.

If you haven't read the book, I'd recommend it.  It would be a far better use of your time than watching this film.

Fun Fact: This was Henry Cavill's second movie.  He plays Guy Pearce's son.  ...or does he?

6. The Adventures of Pluto Nash

I think they were going for 48 Hrs. in space.  Eddie Murphy plays a nightclub owner on the moon, with Randy Quaid as his robot bodyguard and Rosario Dawson as his rather obvious love interest.  One can only imagine that Dennis Quaid is continually haunted by the possibility that his career will, at some point, begin to resemble that of his older brother.

Fun Fact: According to this movie, in the future Hillary Clinton will be on the money, and Trump Realty will be selling housing on the moon!

Buddy cops star in a reality show.  There's a lazy kind of logic in the casting - Eddie Murphy replaying his roles from 48 Hrs. and Beverly Hills Cop, Robert De Niro as the hard-boiled tough guy, Rene Russo as the show's producer, and even William "TJ Hooker" Shatner as the show's director.  But as action comedies go this movie is neither exciting nor funny.  It's not as disastrously bad as The Adventures of Pluto Nash, but it's certainly not good.

One So Bad It's Kind of Good

Semi-retarded action movie set in the south of France, with Jason Statham starring a transporter of ill repute.  The plot makes little sense, but that's all part of the fun.

If you're looking for a good "driver movie" I think Drive has them all beat, but then again that movie's like apples to The Transporter's oranges.  Also in this movie's defense, Taiwanese actress Shu Qi is adorable.